My Dearest Darling: Letters of Love in Wartime

My Dearest Darling: Letters of Love in Wartime 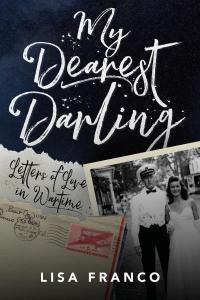 "All my love, my thoughts, my dreams, and my hopes are with you tonight, dearest. Could I but hop on a star and glide to where you are. If only for a moment- a moment of beauty and love that would cause all the separating miles and hours to pale and fade away. No stars for rent. sweetheart, but I'll be around in my own special dream boat sometime between now and the dawn."

U.S. naval officer Donald Storey was not just fighting for his country in World War Il-he was fighting to come home to his love, Margery. The letters the couple wrote to each other became their lifeline, providing comfort in a time of constant uncertainty.

In Lisa Franco's My Dearest Darling: Letters of Love in Wartime, Donald's and Margery's intimate correspondence not only offers a heartwarming account of their romance and personal sacrifices, but also shines a light on historical events as they unfolded overseas and at home. Franco stumbled upon the lost letters during a fateful stop at an antique shop. What started as a curiosity became, with each subsequent letter, an obsession with finding the couple's family, learning their history, and ultimately, discovering what happened to them after the war. With their family's help, as well as other historical resources, Franco maps the couple's life during their five-year-long separation and ensures that no aspect of this enduring love story is left behind.

Lisa Franco has been telling people's stories for more than four decades. As a writer/producer for the ABC television affiliate WTNH 8 in New Haven, Connecticut, she earned multiple Emmy nominations and journalism awards for her documentaries before she became the state communications director for one of the largest nonprofit organizations in the country. Currently, she is a freelance writer.