A Visit from the Cape Cod British Car Club 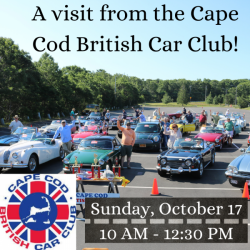 Come to the bookshop on Sunday, October 17, from 10 AM to 12:30 PM to see the wonderful cars of the Cape Cod British Car Club! Club members will be parked outside the bookshop, and all are welcome to look at (but not touch!) the cars and chat with their owners.

The idea behind the Cape Cod British Car Club started in May 2000. After acting as the hosts for a Cape Cod event sponsored by New England Triumphs on Memorial Day weekend, Bob Greene, Kevin D. Thompson and Brian Nickerson thought it would be great to have more events on beautiful Cape Cod. The ocean views coupled with scenic roadways make Cape Cod perfect for leisurely trips in British roadster automobiles, not only in the summer, but year-round. The group felt that there should be enough interest in a club on Cape Cod by residents and visitors alike. In August 2000, organizational efforts began. Fittingly, the first, informal organizational meeting took place at the British Beer Company in Falmouth Heights. Steve Harris, who buzzed the Memorial Day Triumph event with a classic old Lincoln convertible (he also owned 5 Triumphs), joined the planning and serious work got underway when the group established the Cape Cod British Car Club.

Flyers and cards went out to all the usual suspects, as well as members of other Clubs who live on or near the Cape. By the end of October, paid-up members comprised over 20 British car owners, both on the Cape and off.

After a number of informal meetings involving the four organizers at appropriate Cape Cod watering holes, the first formal public meeting was held on a cold and rainy November Tuesday in Yarmouth. The weather was not cooperative; however, a surprising 30+ people attended. Between the pizza and beer, actual business occurred. Officers were elected, bylaws approved and initial planning for events and activities commenced.

After our first year, membership hovered around 150, and covered 7 states. Our first year saw over 30 different club activities ranging from biweekly cruise nights to backyard barbecues, local car shows, tours, dinner cruises, drive-in movies, and lots more. We also had our first major event in October of 2001. This was a three day long British extravaganza that has come to be known as the British Legends Weekend. Our first event attracted over 100 vehicles and now is a yearly happening not to be missed. Check out the updates on this website for the next annual British Legends Weekend and other events!

Within a few years, the club’s membership reached over 300 with about as many members off-Cape as on.  As a relatively newcomer, CCBCC became one of the larger British car clubs in New England.  Events spanned a relatively large geographic area, with about half of the events off-Cape to serve that component of the membership.

The club is now more than a decade old but still an active organization.  New leaders have stepped forward to guide the direction of the club and it has been refreshing.  Come join us at an upcoming event on our calendar.  Don’t by shy; just elbow yourself into any conversation.  Your involvement will pay back dividends.

Some of the club's cars are featured below at a visit to Titcomb's in October of 2017. 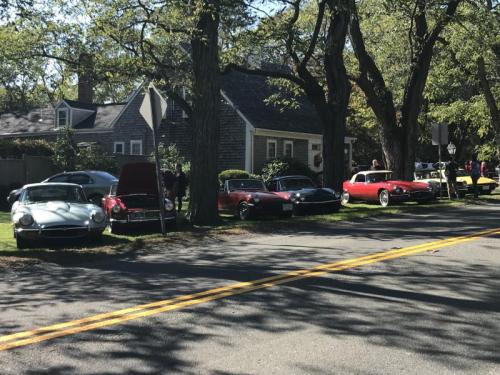