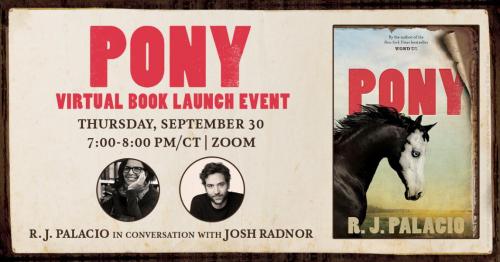 Join us for the virtual launch of R.J. Palacio's Pony! Palacio will be in conversation with actor, writer, director, and musician Josh Radnor. Capacity is limited to 100. The first 30 registrants will receive a bookplate signed by R.J. Palacio.

Ten years ago, Auggie Pullman taught the world to Choose Kind, and now Silas Bird will teach the world to Choose Love. From R. J. Palacio, the #1 New York Times bestselling author of Wonder, comes the page-turning journey of a lifetime. Pony (on sale September 28, 2021, ages 10 and up) is the first novel from Palacio set outside of the world of her globally beloved debut. In Pony, readers will meet a young boy that only Palacio could envision as he sets off on a harrowing odyssey across the vast frontier of 1800s America.  Twelve-year-old Silas is awoken in the dead of night by three horsemen who have come to take his father away. Silas is left shaken, scared, and alone,except for the presence of his companion, Mittenwool . . . who is aghost. When a mysterious pony shows up at his door the next morning, Silas knows what he has to do. He will set out on a perilous quest to find his father—an adventure that will connect him with his past and future, and the unknowable world around him.

Pony is a big-hearted and bold tale that celebrates generosity, finding courage in the most unlikely places, and the beauty and tenderness of the human experience. This gripping novel will resonate with both young readers and adults—and is perfect forthose who love The Yearling or The Black Stallion, as well as adult fans of True Grit or the lean, searing prose of Cormac McCarthy.

Your ticket includes admission to the virtual event and 1 copy of R.J. Palacio's Pony in hardcover. We will email you the link to join the event no sooner that 1 hour before the event begins.

R. J. Palacio is the author of the #1 New York Times bestseller Wonder, which has sold over 12 million copies worldwide. Wonder has been embraced by readers around the world, having been published in over 50 languages, and remains on the New York Times bestseller list, where it has spent over nine years, including over 200 weeks at #1. Since its publication in 2012, Wonder has taken the children’s publishing world by storm, launching an international “Choose Kind” movement, “kindness curricula” in classrooms across the country, and four additional books in the world of Wonder: Auggie & Me: Three Wonder Stories; 365 Days of Wonder; a picture book, We’re All Wonders; and a graphic novel, White Bird: A Wonder Story, in addition to a licensed merchandising program. Together, Palacio’s titles have sold more than 16 million copies worldwide. Wonder was made into a blockbuster movie starring Julia Roberts, Owen Wilson, and Jacob Tremblay. White Bird is currently being filmed as a major motion picture starring Gillian Anderson and Helen Mirren. Palacio lives in Brooklyn with her husband, two sons, and two dogs. Learn more at rjpalacio.com.

Choose Kind Journal: Do One Wonderful Thing Every Day (A Wonder Journal) (Diary)