This will be a Zoom virtual event with Titcomb’s Bookstore selling signed copies of the books. To sign up, follow this link. 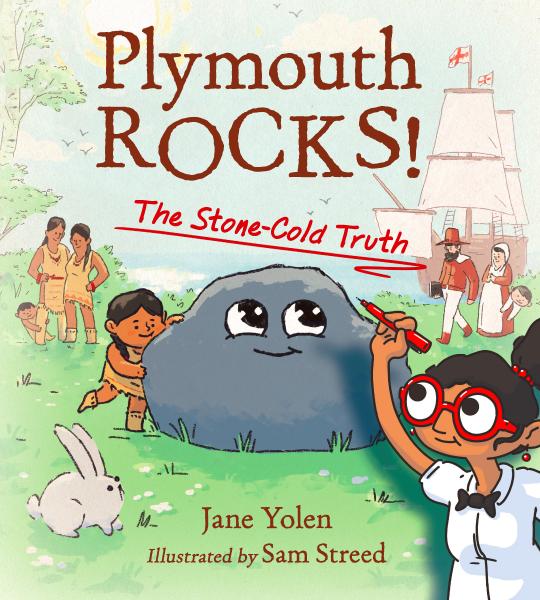 Master storyteller Jane Yolen marks the 400th anniversary of the Mayflower’s arrival. A funny— and fact-checked—look at a historical monument.
The history of Plymouth Rock is explained—by the rock itself. Playful, clever verses offer a comprehensive window into the history of the rock and beyond, dispelling common misconceptions along the way.
Alternating with Rock’s poems is a witty analysis of the truthfulness of its statements, told in the voice of the Fact Checker, encouraging young readers to critically engage with history and question whose truths are being told. Rock’s poems and claims are analyzed and corrected when necessary, showing that history is not necessarily written in stone! Truly a book for today’s savvy media consumers.  Did you know:

No large stepping stone is mentioned in any of the journals that colonists’ wrote?
Indigenous peoples lived in the Eastern Woodlands near the rock for millennia—over 12,000 years before the colonists even arrived. Some Native tribes still reside in the area.
The story of the first Thanksgiving isn’t the whole story?
In 1774 and again in 1834, the rock was broken when colonists moved it?

Sam Streed’s fanciful, kid-friendly illustrations express the humor of Rock’s viewpoint and will appeal to little ones just beginning to learn their history.

Jane Yolen is the award-winning author of over three hundred children’s books including Last Laughs: Prehistoric Epitaphs; Last Laughs: Animal Epitaphs; Bad Girls (with Heidi E.Y. Stemple); Owl Moon, a Caldecott Medal Winner; the How Do Dinosaurs . . . ? series; and Sea Queens. She has been called the Hans Christian Andersen of the Americas. Jane lives in Western Massachusetts.

Sam Streed is a children’s book author/illustrator, game artist, and animator. He is the author/illustrator of Alfred's Book of Monsters and is a graduate of Rhode Island School of Design. Sam lives in Boston, Massachusetts.