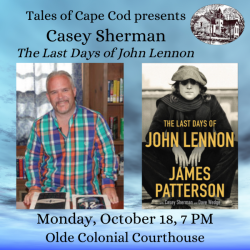 We're so happy to partner with Tales of Cape Cod this fall. Join us for a fantastic evening with author Casey Sherman on Monday, October 18, at 7:00pm at the Olde Colonial Courthouse in Barnstable!

Tales of Cape Cod is located in the historic 1763 Olde Colonial Courthouse, 3046 Main Street (6A), Barnstable Village. Programs are on Monday nights at 7 pm.
$10 for members; $15 for nonmembers. Attendees can join at the door.
Dessert reception and book signing follow. Books are provided onsite by Titcomb's Bookshop. Parking is available at Sturgis Library or St. Mary’s Church.

ABOUT THE LAST DAYS OF JOHN LENNON

Discover one of the greatest true crime stories in music history, as only James Patterson can tell it.

With the Beatles, John Lennon surpasses his youthful dreams, achieving a level of superstardom that defies classification. “We were the best bloody band there was,” he says. “There was nobody to touch us.” Nobody except the original nowhere man, Mark David Chapman. Chapman once worshipped his idols from afar—but now harbors grudges against those, like Lennon, whom he feels betrayed him. He’s convinced Lennon has misled fans with his message of hope and peace. And Chapman’s not staying away any longer.

By the summer of 1980, Lennon is recording new music for the first time in years, energized and ready for it to be “(Just Like) Starting Over.” He can’t wait to show the world what he will do.

Neither can Chapman, who quits his security job and boards a flight to New York, a handgun and bullets stowed in his luggage.

The greatest true-crime story in music history, as only James Patterson can tell it. Enriched by exclusive interviews with Lennon’s friends and associates, including Paul McCartney, The Last Days of John Lennon is the thrilling true story of two men who changed history: One whose indelible songs enliven our world to this day—and the other who ended the beautiful music with five pulls of a trigger.

Hunting Whitey: The Inside Story of the Capture & Killing of America's Most Wanted Crime Boss (Paperback)

The Finest Hours: The True Story of the U.S. Coast Guard's Most Daring Sea Rescue (Paperback)