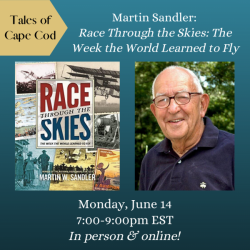 National Book Award winner Marty Sandler, Race Through the Skies, will join Tales of Cape Cod for an encore of last year’s popular program about the birth of aviation.

Sponsored by Lesley Wallace. Titcomb's Bookshop will provide books at the event.

A dessert reception is offered after the program.

Should tickets sell out or should someone be reluctant to come to the Courthouse, Tales of Cape Cod is offering virtual replays the Tuesday through Sunday after the Monday on site program.

From National Book Award winner Martin W. Sandler, a fascinating look at the week that brought aviation fever to the world.

In 1903, the Wright brothers made three brief flights, and no one was there to watch them. Six years later, Wilbur Wright traveled to Europe to evangelicize about aviation and raise money for patents--and the world got aviation fever. That summer, a group of champagne companies organized the first ever international air meet in Rheims, France. They knew they could throw a great party and sell a lot of champagne. They didn't know that this single week would change the course of aviation history. Through remarkable photographs, firsthand accounts, and lively narrative, Marty Sandler tells the story of how the Grande Semaine d'Aviation de la Champagne marked the public introduction to flight.

Martin W. Sandler is an award-winning author of many books for young readers, including The Story of Photography, a Boston Globe-Horn Book Award Honor Book, and Vaqueros. He is also a television producer. A five-time Emmy winner and a two-time Pulitzer Prize nominee, he lives in Massachusetts with his wife.

Race through the Skies: The Week the World Learned to Fly (Hardcover)