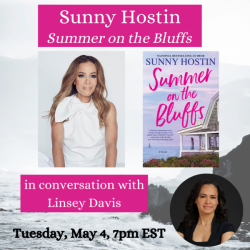 Join us and Emmy-award winners Sunny Hostin and Linsey Davis, as we celebrate the launch of Summer on the Bluffs on Tuesday, May 4, at 7pm EST.

*Ticket includes 1 SIGNED copy of Summer on the Bluffs. You will receive a link to join the event on the date of the event, May 4.*

With beach read season nearly upon us, the upcoming debut novel from Emmy Award-winner, renowned lawyer and journalist, and The View co-host Sunny Hostin, Summer on the Bluffs (on sale May 4, 2021) is the ultimate companion for any vacation bag. An impressive follow-up to her acclaimed nonfiction release last fall, I Am These Truths: A Memoir of Identity, Justice, and Living Between Worlds, this dazzling novel about a life-changing summer on the exclusive beaches of Oak Bluffs in Martha's Vineyard is the perfect read for fans of Elin Hilderbrand, Terry Macmillan, and Dorothea Benton Frank. The first book in a planned series which draws from elements of her own story, this inspired debut remarkably displays Sunny’s impressive wit and command of language.

Enter here for a chance to win this diamond 14-karat gold necklace featured in Summer on the Bluffs, designed in an exclusive collaboration between Samira 13 and Sunny Hostin. The winner will be announced during the virtual launch event.

Although beach reads are a summer staple, they have yet to become fully inclusive. Hostin says, “I wanted to write a beach read with characters who looked like me. Every time I traveled and went to the airport and looked around for a book, there was just nothing that spoke to me, nothing that mirrored my experience.” This inspired to Hostin write the book she wanted to read and to weave in elements from her own life. She says, “It’s a work of fiction but there seems to be this unique void in the genre that’s very much lacking in diversity. I wanted to tell a story with Black and Latina characters front and center." Hostin is not only changing the literary landscape, but also has received early rave reviews for the compelling and juicy story.

Welcome to Oak Bluffs, the most exclusive black beach community in the country. Known for its gingerbread Victorian- style houses and modern architectural marvels, this picturesque town hugging the sea is a mecca for the crème de la crème of black society—where Michelle and Barack Obama vacation and Meghan Markle has shopped for a house for her mom. Black people have lived in this pretty slip of the Vineyard since the 1600s and began buying property in the 1800s, making this posh town the embodiment of “old money.”

Growing up, these three goddaughters from different backgrounds came together each summer at Chateau Laveau. As adults, the cottage is a place this trio of successful yet very different women go to escape, to slow down from their hectic lives, share private time with Ama, and enjoy the gorgeous weather, cool water, and stunning views Oak Bluffs offers.

This summer on the Bluffs, however, will be different. An era is ending: Ama, now nearing seventy-one, is moving to the south of France to reunite with her college sweetheart. She has invited Perry, Olivia, and Billy to spend one last golden summer together with her the way they did when they were kids. And when fall comes, she is going to give the house to one of them.

Each of the women wants the house desperately. Each is grappling with a secret she fears will hurt her and her chances. By the end of summer, old ties will fray, new bonds will be created, and these three found sisters will discover they aren’t the only ones with something to hide. Ama has a few secrets of her own. What she has to give them is far more than property. Between Memorial Day and Labor Day, she will tell these surrogate daughters she fiercely loves and protects everything they never knew they needed to know.

Three-time Emmy Award-winner Sunny Hostin has been a co-host of The View since 2016. On May 4, Sunny will release her debut novel, Summer on the Bluffs (William Morrow), the first of an upcoming three-book series. Drawing from elements of her own story, the book stars a talented Afro-Latina lawyer, chronicling her escapades with her god sisters in Oak Bluffs, Martha’s Vineyard, the most exclusive Black beach community in the country. Last fall, Sunny released her nonfiction book, I Am These Truths: A Memoir of Identity, Justice, and Living Between Worlds (HarperOne), featuring an introspective look into the challenges she faced while being raised by teenage parents in housing projects, the many obstacles she overcame to become a federal prosecutor, and her ultimate path to becoming an incredibly successful television journalist.

In 2020, Sunny announced the development of one-hour drama series The Counsel (Fox), which she is executive producing alongside Scott Free Productions and Universal Television. Written by Erica Shelton (The Good Wife), the project is inspired by Sunny’s own extraordinary political and personal experiences. In it, four thirtysomething women of color, who are leaders in their respective fields of journalism, law, politics and public relations, must rely on their lifelong friendship to overcome a scandal that threatens to unravel everything they’ve achieved.

In 2019, Sunny hosted and executive produced a six-episode documentary series, Truth About Murder with Sunny Hostin, on Investigation Discovery. The series explored the stories behind some of the nation’s most notorious homicides. Each episode, Sunny met with forensic experts, law enforcement officials, prosecutors, defense attorneys and the families of each victim, showing viewers how cases are solved.

Originally from the South Bronx, Sunny’s longstanding commitment to social justice began at a young age. Growing up as the daughter of biracial parents, she faced the pressures of poverty and police harassment, and experienced firsthand the insidious workings of systemic racism. After graduating from Notre Dame Law School, Sunny began her career as an appellate law clerk and went on to become a trial attorney for the Justice Department and a federal prosecutor. During her time as Assistant U.S. Attorney, Sunny was awarded the Special Achievement Award by Attorney General Janet Reno for her prosecution of child sexual predators. Serving as a board member for Safe Horizon, she fought for the successful passage of the New York State Child Victims Act in 2019, making it easier for child sex abuse victims to seek justice as adults. An inescapable voice from the top echelons of news and entertainment, Sunny continues to use her platform to advocate for and give a voice to the marginalized.

A gifted storyteller, Sunny’s impressive depth of knowledge carries over to politics and the criminal justice system. She has brought clarity and context to some of the biggest stories of the past decade, including incisive political analysis of Trump’s 2016 presidential campaign and subsequent presidency, the college admission scandal, the George Zimmerman trial, the unrest in Ferguson and Baltimore, and the AME church shooting in Charleston. In May 2020, Sunny and a group of Black female activists penned an authoritative op-ed for The Washington Post urging presidential candidate Joe Biden to select a Black female vice-presidential candidate, ultimately predicting his selection of Kamala Harris. She has won two Emmys for her work as a correspondent for ABC’s Good Morning America, and one for her work as a correspondent for the ABC News Special, The President and the People. Sunny currently resides in Westchester, NY with her husband and two children, Gabriel, 18, and Paloma, 14.

Additionally, Davis has conducted interviews with major influential figures, politicians and health officials including Hillary Clinton, Mike Pence, Dr. Anthony Fauci, Bill Gates and a powerful exclusive interview with Myon Burrell, a Minneapolis inmate who said he was wrongfully convicted for murder. In June, 2020, as the racial divide in America and the protests against police brutality were growing, Davis led the first roundtable discussion with Black female mayors of Atlanta, Georgia, Washington, D.C., Baton Rouge, Louisiana and Tacoma, Washington. Davis also anchored the documentary “Homegrown Hate: The War Among Us,” which shed a spotlight on the issue of domestic terrorism and hate-inspired violence in the United States.

Davis has covered news stories around the globe, including the Las Vegas massacre, Harvey Weinstein allegations and subsequent MeToo Movement, Boston Marathon bombing, Nairobi Mall massacre and several of President Obama’s trips overseas. Her coverage ranges from the 2016 presidential election to social injustice and various natural disasters, including the earthquake in Haiti and multiple hurricanes.