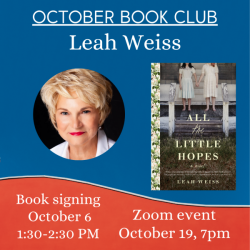 Join us on Zoom for a book club discussion on Tuesday, October 19th, at 7 PM ET with Leah Weiss about her latest novel, All the Little Hopes. Weiss will also make a special appearance at Titcomb's to sign copies of her book between 1:30 and 2:30 PM on Wednesday, October 6th! Can't make it to the signing? Call 508-888-2331 and we'll be happy to reserve a signed copy for you.

REGISTER FOR THE ZOOM HERE.

A Southern story of friendship forged by books and bees, when the timeless troubles of growing up meet the murky shadows of World War II.

Deep in the tobacco land of North Carolina, nothing's been the same since the boys shipped off to war and worry took their place. Thirteen-year-old Lucy Brown is precocious and itching for adventure. Then Allie Bert Tucker wanders into town, an outcast with a puzzling past, and Lucy figures the two of them can solve any curious crime they find--just like her hero, Nancy Drew.

Their chance comes when a man goes missing, a woman stops speaking, and an eccentric gives the girls a mystery to solve that takes them beyond the ordinary. Their quiet town, seasoned with honeybees and sweet tea, becomes home to a Nazi prisoner-of-war camp. More men go missing. And together, the girls embark on a journey to discover if we ever really know who the enemy is.

Lush with Southern atmosphere, All The Little Hopes is the story of two girls growing up as war creeps closer, blurring the difference between what's right, what's wrong, and what we know to be true.

Leah Weiss was born in North Carolina and lives in Virginia. She retired in 2015 from a 24-year career as an Executive Assistant at Virginia Episcopal School and published her debut novel, IF THE CREEK DON’T RISE in August, 2017; it has sold over 100,000 copies. ALL THE LITTLE HOPES was released in July 2021. Leah writes full time, enjoys meeting with book clubs and speaking about finding the story and the characters to tell it.

All the Little Hopes (Paperback)

If the Creek Don't Rise (Paperback)