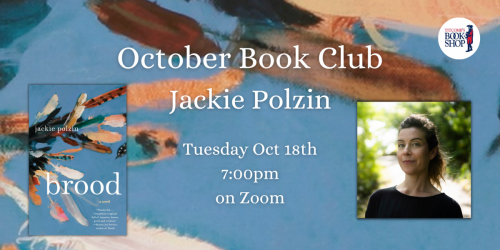 Join us for our October Book Club on Zoom as we discuss Brood with the author, Jackie Polzin!

An exquisite new literary voice—wryly funny, nakedly honest, beautifully observational, in the vein of Jenny Offill and Elizabeth Strout—depicts one woman's attempt to keep her four chickens alive while reflecting on a recent loss.

“Full of nuance and humor and strangeness…[Polzin] writes beautifully about everything.” —The New York Times

"A debut novel about chickens? Yes, indeed. And it's full of nuance and humor, not to mention the very human travails of their grieving owner. Polzin has a gift for detail and an eye for the way little creatures can absorb and sometimes erase our worries." —New York Times Book Review

Over the course of a single year, our nameless narrator heroically tries to keep her small brood of four chickens alive despite the seemingly endless challenges that caring for other creatures entails. From the forty-below nights of a brutal Minnesota winter to a sweltering summer which brings a surprise tornado, she battles predators, bad luck, and the uncertainty of a future that may not look anything like the one she always imagined.

Intimate and startlingly original, this slender novel is filled with wisdom, sorrow, and joy. As the year unfolds, we come to know the small band of loved ones who comprise the narrator's circumscribed life at this moment. Her mother, a flinty former home ec teacher who may have to take over the chickens; her best friend, a real estate agent with a burgeoning family of her own; and her husband, whose own coping mechanisms for dealing with the miscarriage that haunts his wife are more than a little unfathomable to her.

A stunning and brilliantly insightful meditation on life and longing that will stand beside such modern classics as H Is for Hawk and Gilead, Brood rewards its readers with the richness of reflection and unrelenting hope.

“Over the course of a year, told in a collection of snapshots, Brood shows the life of a woman grieving by doing anything but. She gives herself purpose by taking care of a small flock of chickens, as well as finding small but kind, funny, or wry ways of interacting with her neighbors, eccentric mother-in-law, and caring husband, Percy. There are plenty of clever and funny moments from scene to scene (not to mention the odd and interesting analyses of a chicken’s life and point of view), but the beauty in this book lies in the narrator’s acceptance of the everyday, and of all the things — bad, good, but mostly in-between — that come therein.”
— Cat Chapman, The Oxford Exchange, Tampa, FL

Jackie Polzin lives in West St. Paul, Minnesota, with her husband and two children. Her first novel, Brood, won the Sue Kaufman First Fiction Prize and the Los Angeles Times Art Seidenbaum Award for First Fiction, and was shortlisted for the Center for Fiction First Novel Prize. Her writing has appeared in O, The Oprah Magazine, Literary Hub, and The Idaho Review. Jackie attended UW–Madison and earned an MFA from Boise State University. At "The Modern Art Show" in Boise, ID, she performed excerpts from her diaries for the project Leave Nothing Unsaid. Jackie has taught at Boise State, The Cabin, The Edible Schoolyard Berkeley and as a guest lecturer at Pitzer College in Claremont, CA.