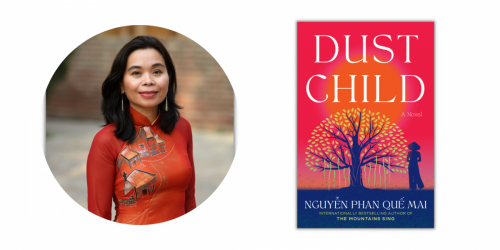 We are so excited to welcome author Nguyễn Phan Quế Mai to Titcomb's Bookshop to talk to us about her most recent novel Dust Child  on Monday April 3rd at 6:30pm. Dust Child will be published on March 23rd, you can pre-order your copy below!

From the internationally bestselling author of The Mountains Sing, a suspenseful and moving saga about family secrets, hidden trauma, and the overriding power of forgiveness, set during the war and in present-day Việt Nam.

In 1969, sisters Trang and Quỳnh, desperate to help their parents pay off debts, leave their rural village and become “bar girls” in Sài Gòn, drinking, flirting (and more) with American GIs in return for money. As the war moves closer to the city, the once-innocent Trang gets swept up in an irresistible romance with a young and charming American helicopter pilot. Decades later, an American veteran, Dan, returns to Việt Nam with his wife, Linda, hoping to find a way to heal from his PTSD and, unbeknownst to her, reckon with secrets from his past.

At the same time, Phong—the son of a Black American soldier and a Vietnamese woman—embarks on a search to find both his parents and a way out of Việt Nam. Abandoned in front of an orphanage, Phong grew up being called “the dust of life,” “Black American imperialist,” and “child of the enemy,” and he dreams of a better life for himself and his family in the U.S.

Past and present converge as these characters come together to confront decisions made during a time of war—decisions that force them to look deep within and find common ground across race, generation, culture, and language. Suspenseful, poetic, and perfect for readers of Min Jin Lee’s Pachinko or Yaa Gyasi’s Homegoing, Dust Child tells an unforgettable and immersive story of how those who inherited tragedy can redefine their destinies through love, hard-earned wisdom, compassion, courage, and joy.

Born into the Red Delta of Northern Việt Nam, Dr. Nguyễn Phan Quế Mai grew up in the Mekong Delta, Southern Việt Nam. She is a writer and translator who has published twelve books of poetry, fiction and non-fiction in Vietnamese and English and has translated seven books. Her last book, The Mountains Sing, was an international bestseller, runner-up for the 2021 Dayton Literary Peace Prize, winner of the 2021 PEN Oakland/Josephine Miles Literary Award, the 2020 Lannan Literary Award Fellowship, and other prizes. Her writing has been translated into more than 15 languages and has appeared in major publications including the New York Times. She has a PhD in Creative Writing from Lancaster University. While working on her most recent novel, Dust Child, Quế Mai helped set up a scholarship program for Amerasians in Việt Nam (the Amerasian Hope & Future Scholarship). For more information, visit: www.nguyenphanquemai.com