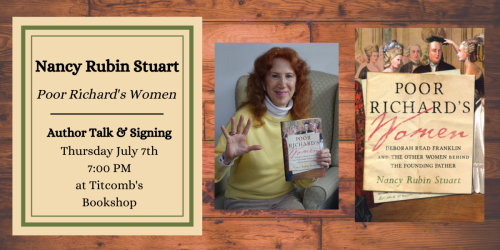 Join us as we welcome author Nancy Rubin Stuart to the bookshop to talk about her latest book Poor Richard's Women: Deborah Read Franklin and the Other Women Behind the Founding Father on Thursday July 7th at 7:00pm. Stuart will sign copies of the book after her presentation. Copies will be for sale at the event. If you can't make it in person, you can order a signed copy here to be picked up at the shop or shipped to you.

“An engrossing look at the human side of Benjamin Franklin . . . Using a post-feminist lens that’s critical of gender essentialism, Stuart rescues these women from obscurity . . . This is a terrific read: poignant, provocative, and probing.”
—Library Journal, Starred Review

What emerges from Stuart’s pen is a colorful and poignant portrait of women in the age of revolution. Set two centuries before the rise of feminism, Poor Richard’s Women depicts the feisty, often-forgotten women dear to Ben’s heart who, despite obstacles, achieved an independence rarely enjoyed by their peers in that era.

Nancy Rubin Stuart is an award-winning author and journalist whose eight nonfiction books focus upon women and social history. Her most recently published works include Defiant Brides: The Untold Story of Two Revolutionary-Era Women and the Radical Men They Married and The Muse of the Revolution: The Secret Pen of Mercy Otis Warren and the Founding of a Nation. A former journalist, Stuart has written for the New York Times, Huffington Post, the New England Quarterly, and national magazines. She serves as executive director of the Cape Cod Writers Center. Connect with her at nancyrubinstuart.com.

The Muse of the Revolution: The Secret Pen of Mercy Otis Warren and the Founding of a Nation (Paperback)

Defiant Brides: The Untold Story of Two Revolutionary-Era Women and the Radical Men They Married (Paperback)

Women in the Literary Landscape (Paperback)