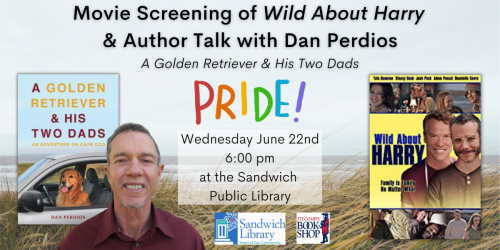 In celebration of National Pride Month, join us as we host a screening of the locally filmed movie Wild About Harry (2021).  We will be joined by the film's Producer, James Egan and author Dan Perdios. Perdios wrote the book, A Golden Retriever & His Two Dads: An Adventure on Cape Cod,  while working as the Prop Master for the movie. There will be a book signing and opportunity to purchase the book following the screening.

Wild About Harry, directed by Gwen Wynne, is set in 1973 on Cape Cod and was inspired by true events.  Wild About Harry tells the story of the havoc wreaked in a teenage girl's life when she discovers her widowed father is gay. Alternately comic and tragic, the film captures the homophobia of the time set against a backdrop of small town America on Cape Cod. Starring Danielle Savre, Josh Peck, Adam Pascal, and Tate Donovan. This family dramedy is inspired by the director's and her sister’s life growing up in Dennis, MA with two gay Dads.

"A Golden Retriever & His Two Dads: An Adventure on Cape Cod" by Dan Perdios

A Golden Retriever & His Two Dads shows that when a Golden Retriever plays matchmaker, anything is possible! A Golden Retriever named Willy "introduces" two guys who become his Dads. Together they take off to Cape Cod to make a film (Wild About Harry). The drama of the movie mirrors the story of their lives. Part travelogue, part romance, part Hollywood, this is a thoroughly entertaining dog adventure you won't want to miss.

Dan Perdios is an extensively published PEN Grant award-winning journalist. His articles have appeared in magazines, newspapers, and websites such as: We The People, The Press Democrat, the Bay Area Reporter, the Russian River Times, the Desert Times, In LA Magazine, The Desert Sun, Bay Woof, and The Dodo.

Dan has been a civil rights activist since he was 19 in the days of Harvey Milk and the gay rights movement. When the epidemic raged it was an easy shift to AIDS activism. Dan attributes his survival during that unimaginable pandemic to the love and loyalty of his dogs. Specifically, Golden Retrievers. His first, Nicholas, came into his life as a golden ball of fur. Willy, the co-star of A Golden Retriever and His Two Dads arrived in 1997. His current Golden, Morgan, was a one year old rescue dog. The love for his dogs opened him up to a deep appreciation for nature and the great outdoors. For the last thirty years, Dan and his Goldens have returned to Cape Cod in the summer to reconnect with his large extended family and to explore the beauty of the Cape and the Islands.

In the last few years Dan has taken his love of nature and his dogs a step further. Now his passion lies with the animal rights movement. He believes animal rights is the new gay rights. He recently bought his first vegan belt and is moving more and more to an animal free diet. 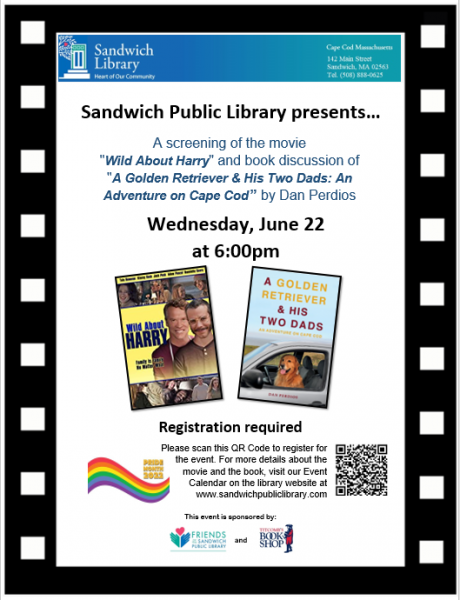 A Golden Retriever & His Two Dads: An Adventure on Cape Cod (Paperback)