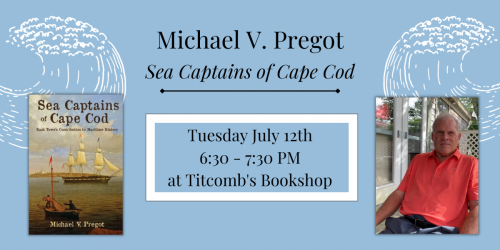 Join us as we welcome author Michael Pregot to the bookshop to talk about his book Sea Captains of Cape Cod on Tuesday July 12th at 6:30pm. Pregot will sign copies of the book after his presentation. Copies will be for sale at the event. If you can't make it in person, you can order a signed copy to be picked up at the shop or shipped to you.

"Perhaps no one can offer a better view of Cape Cod history than the peninsula's iconic sea captains. In "Sea Captains of Cape Cod," Michael Pregot skillfully scans the historical horizon from Falmouth to Provincetown as he navigates his way through the seafaring stories of the Cape's illustrious past." - Don Wilding, author, "Shipwrecks of Cape Cod: Stories of Tragedy and Triumph"

"If you think that the mysterious tales, eccentric characters, and the wild romance of old Cape Cod are gone, then you must read Mike Pregot's Sea Captains of Cape Cod. You'll meet ship commanders like Mad Jack Percival, a hero of the War of 1812, and Hannah Rebecca Burgess from Bourne, who allegedly took command of her husband's ship after he died. Pregot keeps alive the days when Cape Cod sea captains were more familiar with Calcutta and Peru than their own home towns." - Dan Lombardo Author/Theater Director

Whether you call Cape Cod a man-made island or describe it as a geographic peninsula connected to the mainland by bridges, there is one non-debatable fact. Cape Cod is surrounded by water on all four sides, jutting out prominently into the Atlantic Ocean. This characteristic accounts in large measure for its history, its economic development, its aesthetic beauty, and its maritime legacy.

This narrative explores the connection that each Cape Cod town has to the sea as demonstrated through its seafaring residents. It provides a glimpse into heroic maritime adventures, entrepreneurial brilliance, and an appreciation of the resolve needed by captains to thrive in a hostile seaside environment.

A definite emphasis is placed on the role of indigenous people, black sea captains, the female perspective of living aboard a ship, and social status awarded to ethnic groups brave enough to face the perils of deep-sea travel.

This book examines each Cape Cod town's relative engagement to the seafaring life. Can one specific town assert unique mastery of the sea, or should several communities share in this heritage? In reviewing the data, we discover that every town assuredly has a substantive connection to the sea and deserves to be given at least some credit for its maritime history.

Michael Pregot is an educator, writer, and admirer of local history. As a Cape Cod resident, he loves researching the stories of historic maritime figures to share familiar and yet untold vignettes of their deeds with others. His goal is to keep an audience drawn to and focused on vivid stories of the sea.