Mariah Fredericks: Death of a Showman 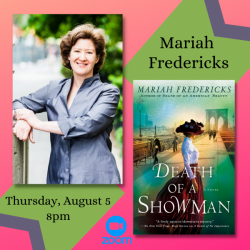 Join us on Thursday, August 5th, at 8:00pm to welcome Mariah Fredericks on Zoom to talk about her newest novel, Death of a Showman!

In Mariah Fredericks's Death of a Showman, the fourth in this absorbing series set in Gilded Age New York, lady’s maid Jane Prescott is thrust into the world of show business, where a killer is stalking Broadway.

It is the summer of 1914 and lady’s maid Jane Prescott is back in New York with the Tylers after a glittering society wedding in Europe. On their return, Jane learns another wedding has taken place. Her old dancing partner, Leo Hirschfeld, has married a chorus girl in his new Broadway musical.

Jane and Louise Tyler are pulled into the sparkling and scandalous world of Broadway, as a star struck Louise invests in Leo's show, and Jane chaperones her at rehearsals. But behind the glittering facade of the theater, there are rivalries, secret romances, and some very dodgy business practices. When the show's abusive producer, Sidney Warburton, is murdered, the list of suspects is long. Was it the comedic star or her gambler boyfriend? The disgruntled costume designer? The beautiful, blond dancer, her jealous husband? Or was it Leo himself, who had more reason than anyone to hate Sidney Warburton?

As the First World war looms in the distance, Jane and tabloid reporter Michael Behan must strip back the masks of these consummate performers before one of them kills again.

MARIAH FREDERICKS was born and raised in New York City, where she still lives with her family. She is the author of several YA and adult novels.

Death of a Showman: A Novel (A Jane Prescott Novel #4) (Hardcover)

Death of an American Beauty: A Novel (A Jane Prescott Novel #3) (Paperback)

Death of a New American: A Novel (A Jane Prescott Novel #2) (Paperback)

ISBN: 9781250252357
Availability: On Our Shelves Now
This book cannot be returned due to publisher restrictions.
Published: Minotaur Books - March 17th, 2020

A Death of No Importance: A Novel (A Jane Prescott Novel #1) (Paperback)