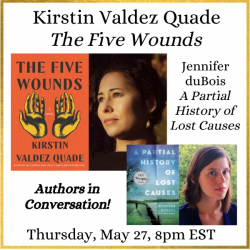 We are giving away a pair of The Five Wounds earrings to one lucky webinar attendee! The winner will be announced during the event. 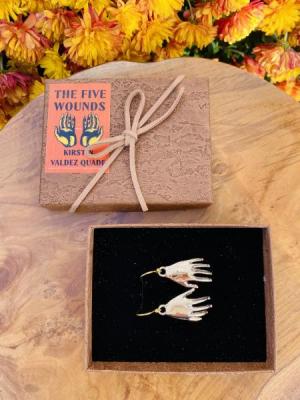 Named one of the Most Anticipated Books of 2021 by Oprah Magazine, The Week, The Millions, and Electric Lit.

From an award-winning storyteller comes a stunning debut novel about a New Mexican family’s extraordinary year of love and sacrifice.

It’s Holy Week in the small town of Las Penas, New Mexico, and thirty-three-year-old unemployed Amadeo Padilla has been given the part of Jesus in the Good Friday procession. He is preparing feverishly for this role when his fifteen-year-old daughter Angel shows up pregnant on his doorstep and disrupts his plans for personal redemption. With weeks to go until her due date, tough, ebullient Angel has fled her mother’s house, setting her life on a startling new path.

Vivid, tender, funny, and beautifully rendered, The Five Wounds spans the baby’s first year as five generations of the Padilla family converge: Amadeo’s mother, Yolanda, reeling from a recent discovery; Angel’s mother, Marissa, whom Angel isn’t speaking to; and disapproving Tíve, Yolanda’s uncle and keeper of the family’s history. Each brings expectations that Amadeo, who often solves his problems with a beer in his hand, doesn’t think he can live up to.

The Five Wounds is a miraculous debut novel from a writer whose stories have been hailed as “legitimate masterpieces” (New York Times). Kirstin Valdez Quade conjures characters that will linger long after the final page, bringing to life their struggles to parent children they may not be equipped to save.

Kirstin Valdez Quade is the author of The Five Wounds and Night at the Fiestas, winner of the National Book Critics Circle’s John Leonard Prize. She is the recipient of a “5 Under 35” award from the National Book Foundation, the Rome Prize, and the Rona Jaffe Foundation Writer’s Award. Her work has appeared in The New Yorker, New York Times, The Best American Short Stories, The O. Henry Prize Stories, and elsewhere. Originally from New Mexico, she now lives in New Jersey and teaches at Princeton University.

In Jennifer duBois’s mesmerizing and exquisitely rendered debut novel, a long-lost letter links two disparate characters, each searching for meaning against seemingly insurmountable odds. With uncommon perception and wit, duBois explores the power of memory, the depths of human courage, and the endurance of love.

In St. Petersburg, Russia, world chess champion Aleksandr Bezetov begins a quixotic quest: He launches a dissident presidential campaign against Vladimir Putin. He knows he will not win—and that he is risking his life in the process—but a deeper conviction propels him forward.

In Cambridge, Massachusetts, thirty-year-old English lecturer Irina Ellison struggles for a sense of purpose. Irina is certain she has inherited Huntington’s disease—the same cruel illness that ended her father’s life. When Irina finds an old, photocopied letter her father wrote to the young Aleksandr Bezetov, she makes a fateful decision. Her father asked the chess prodigy a profound question—How does one proceed in a lost cause?—but never received an adequate reply. Leaving everything behind, Irina travels to Russia to find Bezetov and get an answer for her father, and for herself.

Jennifer duBois is the author of A Partial History of Lost Causes, a finalist for the PEN/Hemingway Award for Debut Fiction. The National Book Foundation named her one of its 5 Under 35 authors. Her second novel, Cartwheel, was a finalist for the New York Public Library’s Young Lions Award. An alumna of the Iowa Writers’ Workshop and Stanford University’s Stegner Fellowship program, duBois is the recipient of a Whiting Award and a National Endowment for the Arts Creative Writing grant. She teaches in the MFA program at Texas State University.

The Five Wounds: A Novel (Hardcover)

A Partial History of Lost Causes: A Novel (Paperback)