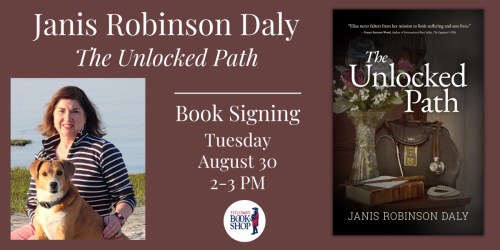 Join us as we welcome local author Janis Robinson Daly to the bookshop for a signing of her book The Unlocked Path (on sale 8/25/22) on Tuesday, August 30th from 2-3pm. If you can't make it in person, you can order a signed copy to be picked up at the shop or shipped to you.

About the book: Meet a “New Woman” of the 20th century: educated, career-minded, independent Eliza Pearson Edwards. In 1897 Philadelphia, after witnessing her aunt's suicide, Eliza rejects her mother’s wishes for a society debut, and at a time when five percent of doctors are female, she enters a woman’s medical college. With the support of a circle of women and driven by a determination to conquer curriculum demands, battle sexism, and overcome doubts, Eliza charts her new life path. Combining science and sympathy, she triumphs to heal others and herself.

About Janis Robinson Daly: Daly's discovery that her great-great grandfather was a founder of the Woman’s Medical College of Pennsylvania inspired her next career direction: unearthing the stories of women whose lives have remained in the shadows. Her debut novel, The Unlocked Path, balances authenticity and rich historical detail with deep emotional connections to create engaging fictional characters. Daly graduated with a B.A. in Psychology from Wheaton College, at the time, an all-women’s college. At Wheaton, she developed a fond appreciation of the supportive relationships established between students, faculty, and alumnae and a heightened awareness of female-centric issues. Both directed her writing of The Unlocked Path. Janis lives in Barnstable with her husband and their rescue pup.