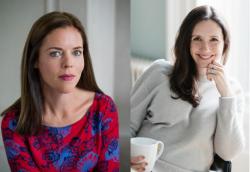 We are so happy to present J. Courtney Sullivan, author of Friends and Strangers, and Mary Beth Keane, author of Ask Again, Yes!

An insightful, hilarious, and compulsively readable novel about a complicated friendship between two women who are at two very different stages in life, from the best-selling author of Maine and Saints for All Occasions (named one of the Washington Post's Ten Best Books of the Year and a New York Times Critics' Pick).

J. Courtney Sullivan is the New York Times best-selling author of the novels Commencement, Maine, The Engagements, and Saints For All Occasions. Her work has been translated into 17 languages. Sullivan's writing has appeared in The New York Times Book Review, The Washington Post, The Chicago Tribune, New York magazine, Elle, Glamour, Allure, Real Simple, and O: The Oprah Magazine, among many others. She lives in Brooklyn, New York with her husband and two children.

Mary Beth Keane attended Barnard College and the University of Virginia, where she received an MFA. She has been named one of the National Book Foundation’s “5 under 35,” and was awarded a Guggenheim fellowship for fiction writing. She currently lives in Pearl River, New York with her husband and their two sons. She is the author of The Walking People, Fever, and Ask Again, Yes.

Friends and Strangers: A novel (Hardcover)