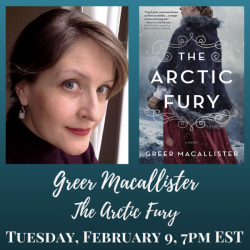 Join us on February 9th at 7pm EST on Zoom as we welcome Greer Macallister (Woman 99) to talk about her new novel, The Arctic Fury!

A dozen women join a secret 1850s Arctic expedition--and a sensational murder trial unfolds when some of them don't come back.

Eccentric Lady Jane Franklin makes an outlandish offer to adventurer Virginia Reeve: take a dozen women, trek into the Arctic, and find her husband's lost expedition. Four parties have failed to find him, and Lady Franklin wants a radical new approach: put the women in charge.

A year later, Virginia stands trial for murder. Survivors of the expedition willing to publicly support her sit in the front row. There are only five. What happened out there on the ice?

Set against the unforgiving backdrop of one of the world's most inhospitable locations, USA Today bestselling author Greer Macallister uses the true story of Lady Jane Franklin's tireless attempts to find her husband's lost expedition as a jumping-off point to spin a tale of bravery, intrigue, perseverance and hope.

“Greer Macallister has a proven track record for writing excellent historical fiction. She is at the top of her game in The Arctic Fury, in which a dozen women are recruited to journey to the frozen tundra in hopes of finding a lost expedition. Facing a brutal climate, clashing wills, misogyny, and death, these women rise to accept a challenge that no male explorer has been able to accomplish. Macallister has created strong, memorable characters facing unfathomable conditions and choices. Alternating between the arctic journey and a riveting courtroom drama, The Arctic Fury is a non-stop thrill.”
— Pamela Klinger-Horn, Excelsior Bay Books, Excelsior, MN