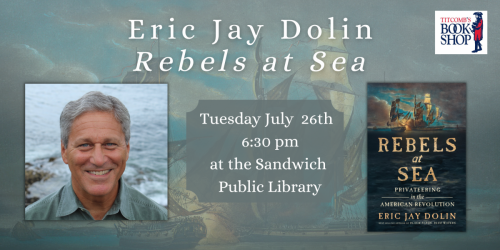 REGISTER HERE. Registration is free but required, and space is limited.

The bestselling author of Black Flags, Blue Waters reclaims the daring freelance sailors who proved essential to the winning of the Revolutionary War.

The heroic story of the founding of the U.S. Navy during the Revolution has been told many times, yet largely missing from maritime histories of America’s first war is the ragtag fleet of private vessels that truly revealed the new nation’s character—above all, its ambition and entrepreneurial ethos.

In Rebels at Sea, best-selling historian Eric Jay Dolin corrects that significant omission, and contends that privateers, as they were called, were in fact critical to the American victory. Privateers were privately owned vessels, mostly refitted merchant ships, that were granted permission by the new government to seize British merchantmen and men of war. As Dolin stirringly demonstrates, at a time when the young Continental Navy numbered no more than about sixty vessels all told, privateers rushed to fill the gaps. Nearly 2,000 set sail over the course of the war, with tens of thousands of Americans serving on them and capturing some 1,800 British ships. Privateers came in all shapes and sizes, from twenty-five foot long whaleboats to full-rigged ships more than 100 feet long. Bristling with cannons, swivel guns, muskets, and pikes, they tormented their foes on the broad Atlantic and in bays and harbors on both sides of the ocean.

The men who owned the ships, as well as their captains and crew, would divide the profits of a successful cruise—and suffer all the more if their ship was captured or sunk, with privateersmen facing hellish conditions on British prison hulks, where they were treated not as enemy combatants but as pirates. Some Americans viewed them similarly, as cynical opportunists whose only aim was loot. Yet Dolin shows that privateersmen were as patriotic as their fellow Americans, and moreover that they greatly contributed to the war’s success: diverting critical British resources to protecting their shipping, playing a key role in bringing France into the war on the side of the United States, providing much-needed supplies at home, and bolstering the new nation’s confidence that it might actually defeat the most powerful military force in the world.

Creating an entirely new pantheon of Revolutionary heroes, Dolin reclaims such forgotten privateersmen as Captain Jonathan Haraden and Offin Boardman, putting their exploits, and sacrifices, at the very center of the conflict. Abounding in tales of daring maneuvers and deadly encounters, Rebels at Sea presents this nation’s first war as we have rarely seen it before.

"An often-overlooked factor in America's victory in the War of Independence was the role of privateering - sailors who captured British ships or merchants who at considerable risk acquired essential goods for the army and home front. Eric Jay Dolin's wonderful Rebels at Sea demonstrates that privateering was more than a sideshow. It caused Great Britain enormous problems that contributed to its failure to crush the American rebellion. This book is must reading for all who wish to learn more about the Revolutionary War."
--John Ferling, author of Winning Independence: The Decisive Years of the Revolutionary War, 1778-1781

"Yet another maritime masterpiece by one of the top historians of the oceans! Rebels at Sea is a brilliant exposition of a little-understood and underappreciated part of the American Revolution under way. Like his earlier works, it is full of fresh thinking and sharply observed anecdotes that both inform and delight. Eric Jay Dolin's books deserve a prominent place on every sailor's bookshelf."
--Admiral James Stavridis, 16th Supreme Allied Commander at NATO, and author of The Sailor's Bookshelf: Fifty Books to Know the Sea

Eric Jay Dolin is the author of fourteen books. His most recent is A Furious Sky: The Five-Hundred-Year History of America's Hurricanes, which received a number of accolades, including being chosen by the Washington Post as one of 50 Notable Works of Nonfiction in 2020, by Kirkus Reviews as one of the Best Nonfiction Books of 2020 (in addition to being a Kirkus Prize finalist), by the Library Journal and Booklist as one of the Best Science & Technology Books of 2020, and by the New York Times Book Review as an "Editor's Choice." Other books include Leviathan: The History of Whaling in America, which was chosen as one of the Best Nonfiction Books of 2007 by the Los Angeles Times and the Boston Globe, and also won the 2007 John Lyman Award for U.S. Maritime History; and Black Flags, Blue Waters: The Epic History of America's Most Notorious Pirates, which was chosen as a "Must-Read" book for 2019 by the Massachusetts Center for the Book, and was a finalist for the 2019 Julia Ward Howe Award given by the Boston Author's Club. A graduate of Brown, Yale, and MIT, where he received his Ph.D. in environmental policy, Dolin lives in Marblehead, Massachusetts, with his family.

Rebels at Sea: Privateering in the American Revolution (Hardcover)

A Furious Sky: The Five-Hundred-Year History of America's Hurricanes (Paperback)

Brilliant Beacons: A History of the American Lighthouse (Paperback)

Leviathan: The History of Whaling in America (Paperback)