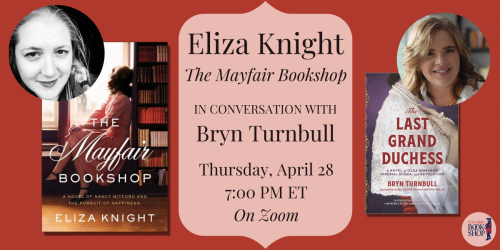 Join us for a virtual conversation with Eliza Knight to discuss her new book, The Mayfair Bookshop: A Novel of Nancy Mitford and the Pursuit of Happiness. Knight will be in conversation with Bryn Turnbull, author of The Last Grand Duchess.

USA Today bestselling author Eliza Knight brings together a brilliant dual-narrative story about Nancy Mitford—one of 1930s London’s hottest socialites, authors, and a member of the scandalous Mitford Sisters—and a modern American desperate for change, connected through time by a little London bookshop.

1938: She was one of the six sparkling Mitford sisters, known for her stinging quips, stylish dress, and bright green eyes. But Nancy Mitford’s seemingly dazzling life was really one of turmoil: with a perpetually unfaithful and broke husband, two Nazi sympathizer sisters, and her hopes of motherhood dashed forever. With war imminent, Nancy finds respite by taking a job at the Heywood Hill Bookshop in Mayfair, hoping to make ends meet, and discovers a new life.

Present Day: When book curator Lucy St. Clair lands a gig working at Heywood Hill she can’t get on the plane fast enough. Not only can she start the healing process from the loss of her mother, it’s a dream come true to set foot in the legendary store. Doubly exciting: she brings with her a first edition of Nancy’s work, one with a somewhat mysterious inscription from the author. Soon, she discovers her life and Nancy’s are intertwined, and it all comes back to the little London bookshop—a place that changes the lives of two women from different eras in the most surprising ways.

ABOUT ELIZA KNIGHT
Eliza Knight is an award-winning and USA Today bestselling author. Her love of history began as a young girl when she traipsed the halls of Versailles. She is a member of the Historical Novel Society and Novelists, Inc., and the creator of the popular historical blog, History Undressed. Knight lives in Maryland with her husband, three daughters, two dogs and a turtle.

ABOUT THE LAST GRAND DUCHESS BY BRYN TURNBULL

This sweeping novel takes readers behind palace walls to see the end of Imperial Russia through the eyes of Olga Nikolaevna Romanov, the first daughter of the last tsar.

Grand Duchess Olga Romanov comes of age amid a shifting tide for the great dynasties of Europe. But even as unrest simmers in the capital, Olga is content to live within the confines of the sheltered life her parents have built for her and her three sisters: hiding from the world on account of their mother's ill health, their brother Alexei's secret affliction, and rising controversy over Father Grigori Rasputin, the priest on whom the tsarina has come to rely. Olga's only escape from the seclusion of Alexander Palace comes from the grand tea parties her aunt hosts amid the shadow court of Saint Petersburg--a world of opulent ballrooms, scandalous flirtation, and whispered conversation.

But as war approaches, the palaces of Russia are transformed. Olga and her sisters trade their gowns for nursing habits, assisting in surgeries and tending to the wounded bodies and minds of Russia's military officers. As troubling rumors about her parents trickle in from the front, Olga dares to hope that a budding romance might survive whatever the future may hold. But when tensions run high and supplies run low, the controversy over Rasputin grows into fiery protest, and calls for revolution threaten to end three hundred years of Romanov rule.

At turns glittering and harrowing, The Last Grand Duchess is a story about dynasty, duty, and love, but above all, it's the story of a family who would choose devotion to each other over everything--including their lives.

Looking for more historical fiction from Bryn Turnbull? Don't miss The Woman Before Wallis. For fans of The Paris Wife and The Crown, this stunning novel tells the true story of the American divorc e who captured Prince Edward's heart before he abdicated his throne for Wallis Simpson.

The Mayfair Bookshop: A Novel of Nancy Mitford and the Pursuit of Happiness (Paperback)