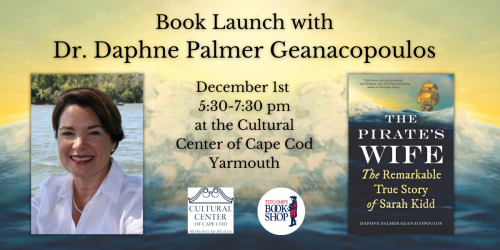 Join us as we welcome author Dr. Daphne Palmer Geanacopoulos for the launch of her new book, The Pirate's Wife: The Remarkably True Story of Sarah Kidd (published 11/8/22) at the Cultural Center of Cape Cod in South Yarmouth on Thursday December 1st from 5:30 - 7:30pm. Refreshments will be served.

Both of Geanacopoulos' books will be for sale at the event courtesy of Titcomb's Bookshop. Can't make it to the signing? No problem! You can order a signed book below to be picked up at the bookshop or mailed after the event. If you want your copy personalized, please note in the comments section during checkout.

Order The Pirate Next Door.

Dr. Daphne Palmer Geanacopoulos is a historian, journalist and author of The Pirate Next Door: The Untold Story of Eighteenth Century Pirates' Wives, Families and Communities and The Pirate's Wife. Her writing has appeared in the New York Times, the Washington Post, Southern Living, Virginia Business and other outlets. She lives in South Yarmouth, Massachusetts, with her husband, David.

ABOUT THE PIRATE'S WIFE

The dramatic and deliciously swashbuckling story of Sarah Kidd, the wife of the famous pirate Captain Kidd, charting her transformation from New York socialite to international outlaw during the Golden Age of Piracy.

Captain Kidd was one of the most notorious pirates to ever prowl the seas. But few know that Kidd had an accomplice, a behind-the-scenes player who enabled his plundering and helped him outpace his enemies.

That accomplice was his wife, Sarah Kidd, a well-to-do woman whose extraordinary life is a lesson in reinvention and resourcefulness. Twice widowed by twenty-one and operating within the strictures of polite society in seventeenth- and eighteenth-century New York, Sarah secretly aided and abetted her husband, fighting alongside him against his accusers. More remarkable still was that Sarah not only survived the tragedy wrought by her infamous husband's deeds but went on to live a successful and productive life as one of New York's most prominent citizens.

Marshaling in newly discovered primary-source documents from archives in London, New York and Boston, historian and journalist Daphne Palmer Geanacopoulos reconstructs the extraordinary life of Sarah Kidd, uncovering a rare example of the kind of life that pirate wives lived during the Golden Age of Piracy. A compelling tale of love, treasure, motherhood and survival, this landmark work of narrative nonfiction weaves together the personal and the epic in a sweeping historical story of romance and adventure.

"A fascinating and intriguing story about the woman behind one of the most iconic pirates of all. Geanacopoulos's compelling portrait of Sarah Kidd's turbulent and often tragic life, and her indomitable spirit, is full of dramatic twists and turns that will leave you wondering if there is any truth to the legend of Captain Kidd's hidden treasure."-- Eric Jay Dolin, author of Black Flags, Blue Waters: The Epic History of America's Most Notorious Pirates

"The Pirate's Wife falls under the category of narrative non-fiction but reads like a lively historical novel. Not only does Daphne Palmer Geanacopoulos flesh out the story of the wife of the notorious pirate William Kidd, she brings to life the New York of the seventeenth and eighteenth century with meticulous research and rich prose. I sailed right along with this saga. A jolly good ride."-- Sally Cabot Gunning, author of The Widow's War

ABOUT THE PIRATE NEXT DOOR (Purchase a signed copy here!)

Pirate lore has long captivated us and through the centuries it has worked its way into our literature, movies and popular culture. But many of these depictions and our understanding of the nature of the pirate are wrong. The Pirate Next Door takes what we think we know about pirates and turns it on its head by exploring the human side of pirates—the wives, families and communities of the men who have long been considered outlaws and outcasts. It delves into the inner lives of pirates, focusing on their faiths, communal ties and great loves. Using newly discovered primary sources from the late seventeenth and eighteenth centuries from archives in New England and London, this compelling story is told through the lives of four pirate captains who were active during the Golden Age of Piracy—Samuel Bellamy of Cape Cod, Massachusetts; Paulsgrave Williams of Block Island, Rhode Island; William Kidd of New York and Samuel Burgess of New York. This book corrects long-held beliefs about pirate life and brings to light the strong women behind these men.