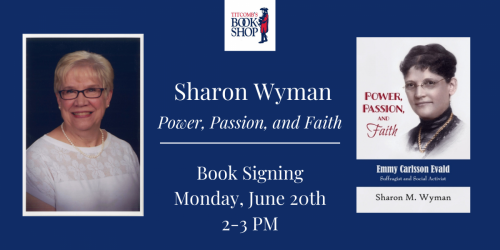 Join us as we welcome local author Sharon Wyman to the bookshop for a signing of her book Power, Passion, and Faith: Emmy Evald Carlsson, Suffragist and Social Activist on Monday June 20th from 2-3pm. If you can't make it in person, you can order a signed copy here to be picked up at the shop or shipped to you.

For Emmy Evald, it is a day of reckoning.

Born the daughter of a pioneer preacher in 1857 in Geneva, Illinois, Emmy Evald grew up in the poor section of Chicago known as "Swede Town." Despite her humble beginnings, she became one of the most influential and remarkable Swedish American women of her day.

Emmy began challenging the male-dominated church and social mores early on. Clear in her vision, she established the Lutheran Woman's Missionary Society in 1892, raising more than $3 million, which provided health care and education to women worldwide.

A distinguished orator, Emmy led the charge on behalf of women's suffrage and marched with Susan B. Anthony to the US Congress in 1902.

Her actions met with both victory and defeat. Some women felt a woman's place was in the home and resented her. Men tried to silence her spirit. But she was a "force to be reckoned with," one who never gave up on the fight for women's rights and social justice.

As the great-granddaughter of Emmy Evald, Sharon M. Wyman utilized her access to Evald's personal papers, scrapbooks, and photographs to write Power, Passion, and Faith. Plus, she had the inside scoop from family members who knew Evald best.

Sharon Wyman is a half-Swede, who attributes her very being to the Chicago Fire of October 8, 1871. She grew up in St. Louis, Missouri, and currently lives on Cape Cod with her husband Bob, their beagle Annie, and a cat named Calvin. Wyman spent twenty years in corporate communications and currently resides on Cape Cod. sharonwyman.com