Hanging out in a cemetery isn’t every girl’s idea of a good time, but for Paislee Grimes, the dead can be the best company. Raised in the sleepy Connecticut town of Pine Grove by an undertaker and a coroner, Paislee has seen more than her fair share of death, and she’s right at home amid the morbid and macabre.
She’s happy enough to spend her last months before college cobbling together a history of the place she loves most and studying the lives of the people buried in her backyard, but when the body of a classmate turns up face down in the lake, it’s Paislee’s time to shine.
Armed with a fierce drive and a gift for forensic anthropology, Paislee dives headfirst into the biggest shock Pine Grove has ever seen.
Suddenly everyone is a suspect—friends, love interests, even the mayor. And in a community as tight-knit as hers, no one wants to believe the killer could be one of their own.
But where there’s a murder, there’s a murderer, and with more questions than answers, it’s beginning to look like Paislee is the only one who can connect the dots.
​

K.A. Goodsell lives in Connecticut with her siamese cat, Mocha and her husband. For the last decade, she has worked in the hospitality industry ranging from Front Desk to Revenue Analyst (basically a data and CRM nerd), to enjoying writing and learning about her craft. She graduated from Western Connecticut State University in 2013 with a B.A. in Anthropology/Sociology, completing a thesis on importance of gravestone studies. Since then, she has given multiple lectures and speeches about gravestone studies and in 2018 gave a TEDx talk about the topic and how she cataloged over 14,000 gravestones throughout Fairfield County, Connecticut in search of the “data carved in stone”.  Here's a link to her TEDx talk.

When she’s not working, she’s enjoying spending time with her family and friends, playing board games, watching anime, and eating all the dumplings she can get her hands on. 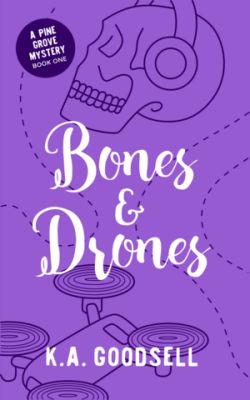 Sign Up Now
For Email Newsletters you can trust.