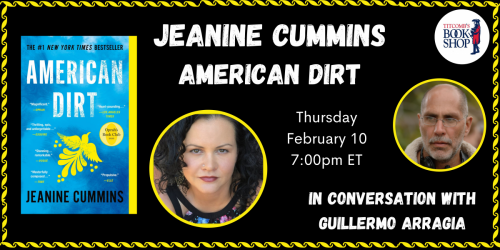 Join us for a virtual author event with bestselling author Jeanine Cummins for the paperback release of American Dirt (on sale 2/1/22). Cummins will be interviewed by author, screenwriter, and producer Guillermo Arriaga.

Lydia lives in Acapulco. She has a son, Luca, the love of her life, and a wonderful husband who is a journalist. And while cracks are beginning to show in Acapulco because of the cartels, Lydia’s life is, by and large, fairly comfortable. But after her husband’s tell-all profile of the newest drug lord is published, none of their lives will ever be the same.

Forced to flee, Lydia and Luca find themselves joining the countless people trying to reach the United States. Lydia soon sees that everyone is running from something. But what exactly are they running to?

Jeanine Cummins is the New York Times bestselling author of American Dirt, as well as the novels The Outside Boy and The Crooked Branch and the bestselling memoir A Rip in Heaven. She lives in New York with her husband and two children.

Guillermo Arriaga has published the novels The Guillotine Squad (1991), A Sweet Scent of Death (1994), The Night Buffalo (1999) and the collection of short stories Return 201. His work has been translated into eighteen languages. He wrote the films Amores Perros, 21 Grams and Babel, which form a trilogy that opted for non-linear narrative and that reflects on the weight of life over death. He also wrote Los Tres Entierros de Melquiades Estrada. In 2008 he presented his directorial debut: The Burning Plain. He recently produced and co-wrote the story of From There, the first Ibero-American film to win the Golden Lion at the Venice Film Festival and winner of the 2020 Alfaguara Prize for his novel Salvar el Fuego.