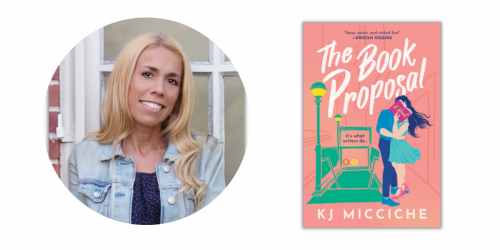 Join us as we welcome authors K.J. Micciche and Lauren H Mae on Thursday May 18th at 6:30pm at Titcomb's Bookshop to celebrate the launch of Micciche's new romance novel The Book Proposal (on sale May 16th 2023).

Micciche will be signing books after the conversation. If you are unable to join us in person, you can order a book to be signed by the author by ordering below and writing "signed copy" in the order comments or by calling us at the shop at 508-888-2331.

DESPERATELY SEEKING FICTIONAL HERO FOR HAPPILY EVER AFTER

Broke up with, broke, and with a vicious case of writer's block, romance writer Gracie Landing is a hot mess. She can hardly be blamed for drinking one (or a few) too many cocktails when out with her besties in an attempt to cheer herself up. Sometime in the foggy wee hours, she recklessly emails her unrequited high-school crush, Colin Yarmouth, who is now a successful attorney harboring regrets of his own. When she receives an intriguingly friendly (not to say flirty) response, her acute embarrassment is overcome only by her fervent curiosity—what would a hottie like Colin be like as a grown up? The two forge an unlikely friendship that's unmistakably headed for more. Colin's tales of his own woeful break-up become fodder for Gracie's fertile imagination and her current work-in-progress takes off. With the deadline looming and her checking account dwindling, Gracie has no idea that borrowing Colin's story could wreak havoc on her life, her career, and her own chance at happily-ever-after…

K.J. Micciche is a novelist who hails from Queens, New York, where she spent countless hours curled up under the covers, reading The Babysitters Club as a kid by flashlight way past her bedtime. K.J. runs a non-profit organization that teaches kids with dyslexia how to read. Proud mom of two little girls, she and her family live on Long Island and summer in Cape Cod.

Lauren H. Mae is a romance author who loves a hard-earned happy ever after. She lives with her husband and two sons in beautiful Portland, Maine. She has written The Summer Nights series and has a forthcoming book (on sale September 12th 2023) called Wish Lists and Road Trips.