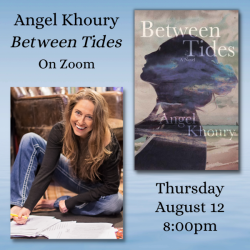 Join us in welcoming Angel Khoury on Zoom to talk about her new novel, Between Tides!

Between Tides is a captivating historical novel set on Cape Cod and North Carolina's Outer Banks, perfect for readers of Where the Crawdads Sing and Marilynne Robinson's Housekeeping.

Writer Angel Khoury has spent the last 40 years on North Carolina’s Outer Banks. A long-ago summer spent working as a dishwasher at the Avalon Fishing Pier, waves washing below her feet while reading MacNeill’s The Hatterasman propped above the sink, convinced her to stay. Now, she shares her literary debut, BETWEEN TIDES (Dzanc Books; August 10, 2021), a rich and powerful historical novel set on both the Outer Banks and Cape Cod.

In this undeniable page turner, Khoury introduces readers to a tangled family history spanning a half century, about the slow-motion vanishing of a man who moves between his two families, on Cape Cod and the Outer Banks, and the three women he leaves stranded in his wake. In the 1890s a man deserts his wife and his post as keeper of the Chatham Beach Lifesaving Station to start a new family far to the south, at Cape Hatteras. In the 1940s his daughter, en route to serve in World War II with the Red Cross, travels to Cape Cod and meets his first wife, reanimating a life long buried: memories of her courtship, her bitter losses, and her husband’s inconstancies.

Set on two wild seascapes, Cape Cod and North Carolina's Outer Banks, Between Tides is a lyrical novel for readers of Virginia Woolf, Djuna Barnes, and Marilynne Robinson--a story of two women stitching together a family ripped at the seams and discovering that even through absence, love's presence is everlasting.

Peorder a signed/personalized copy of Out on a Limb (8/10/21) and receive special access to a virtual meet & greet with the author!