The Borden Murders: Lizzie Borden and the Trial of the Century (Paperback) 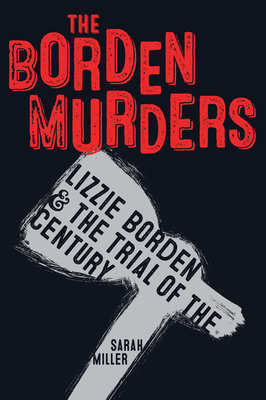 The Borden Murders: Lizzie Borden and the Trial of the Century (Paperback)


In stock at our warehouse - Ships in 5-12 business days
With murder, court battles, and sensational newspaper headlines, the story of Lizzie Borden is compulsively readable and perfect for the Common Core.

Lizzie Borden took an axe, gave her mother forty whacks. When she saw what she had done, she gave her father forty-one.

In a compelling, linear narrative, Miller takes readers along as she investigates a brutal crime: the August 4, 1892, murders of wealthy and prominent Andrew and Abby Borden. The accused? Mild-mannered and highly respected Lizzie Borden, daughter of Andrew and stepdaughter of Abby. Most of what is known about Lizzie’s arrest and subsequent trial (and acquittal) comes from sensationalized newspaper reports; as Miller sorts fact from fiction, and as a legal battle gets underway, a gripping portrait of a woman and a town emerges.

With inserts featuring period photos and newspaper clippings—and, yes, images from the murder scene—readers will devour this nonfiction book that reads like fiction.

A School Library Journal Best Best Book of the Year

“Sure to be a hit with true crime fans everywhere.” —School Library Journal, Starred
Sarah Miller is the author of two historical fiction novels, Miss Spitfire: Reaching Helen Keller, which was called “an accomplished debut” in a starred review from Booklist and was named an ALA-ALSC Notable Children’s Recording, and The Lost Crown, about the Romanovs, hailed as “fascinating” in a starred review from Kirkus Reviews.
“Like a historical version of ‘Law & Order,’ the book chronologically reviews and defines the case in lively prose…Miller presents the macabre subject matter so objectively that readers will find their opinions of Borden’s criminal potential shifting from chapter to chapter.” —The New York Times Book Review

“Fans of the podcast Serial will find much to enjoy here, as each chapter reveals a new piece of the puzzle and examines it from every angle available…Sure to be a hit with true crime fans everywhere.” —School Library Journal starred review

"The high-appeal topic will attract many readers, and the suspenseful account will have them trying to solve this still unresolved murder mystery." —Kirkus Reviews

“…an exhaustive look at the famous unsolved murders of August 1892…Miller relies on newspaper accounts and court transcripts to create lively scenes filled with authentic dialogue, making for a suspenseful crime story, which is all the more intriguing for its lasting doubt.” –Publishers Weekly