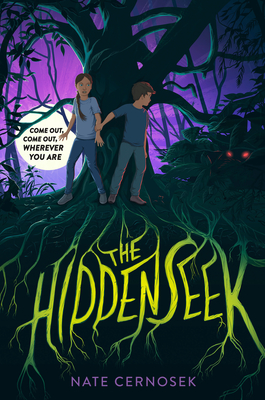 
On Our Shelves Now
In this spine-chilling middle grade debut--perfect for fans of Small Spaces and the Goosebumps series--a brother and sister are transported to a cursed world based on the game hide-and-seek, where the only way to get home is to win.

"You hid. But you were not found. You thought you were playing a harmless game. You were wrong."

After Holly and Hector Thorn are left behind during a simple game of hide-and-seek, they find themselves transported to a gloomy, magical world seemingly trapped in time--the Hiddenseek. There, It, a witch with the ability to transform into a raven and a wolf, stalks children day and night, turning any she can lay hands on into statues, frozen forever in their final moments of terror.

Together with the other lost children they encounter, Holly and Hector will have to unravel the mysterious origins of the Hiddenseek and find a way to put a stop to the curse once and for all, before they get stuck there forever . . . Because in this twisted game of hide-and-seek, they are playing for their lives.
Nate Cernosek lives in Austin, Texas, with his wife and two children. The Hiddenseek is his first novel.
“Packed with nonstop spooky thrills that are never what they first seem. I was hooked all the way to the very last page!” —David Yoon, New York Times bestselling author of Frankly in Love

“Cernosek’s eerie, fast-paced narrative and fresh concept is perfect for fans of R. L. Stine and younger readers ready for the likes of Stephen King, with chilling dialogue, effective jump scares, and an intriguing mystery to unravel.” —Booklist

“Terrifying . . . Cernosek doesn’t waste words and never slows the pace . . . This one is all about the action, which Cernosek certainly delivers.” —Kirkus Reviews