The Greatest Polar Expedition of All Time: The Arctic Mission to the Epicenter of Climate Change (Hardcover) 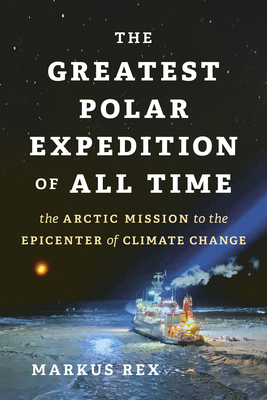 The Greatest Polar Expedition of All Time: The Arctic Mission to the Epicenter of Climate Change (Hardcover)


On Our Shelves Now
​​For readers of Madhouse at the End of the Earth, Endurance, and other seafaring adventure stories comes a thrilling account of a 21st-century Arctic mission." A contemporary classic "--Ken McGoogan, author of Fatal Passage "Show-stopping."---Publisher's Weekly STARRED ReviewThe Greatest Polar Expedition of All Time vividly describes one year aboard the Polarstern, a powerful ice-breaker ship that journeyed deep into the Arctic in 2019, carrying over 100 scientists and crew known as the MOSAiC Expedition. Hailing from across the world, they would become the largest expedition to ever survive a polar winter. Their purpose? To understand - and predict - the impacts of climate change on the Arctic.
Written by the expedition's leader, the renowned atmospheric scientist Markus Rex, this page-turner reads like a captain's log of daily life aboard the Polarstern. Living in one of the most remote, dangerous, and electrifying places on earth, Rex describes incredible sights: polar bears playing with scientific equipment, Christmas parties in the bitter cold, frostbitten scientists, and hair-raising storms that threaten to break the Polarstern's cables and send it flying across the ice. He also reveals breathtaking science from deep inside the sea ice.
Filled with sobering, heart-warming, and bone-chilling moments, The Greatest Polar Expedition of All Time is a testament to Rex's extraordinary drive to save a precious ecosystem. It's also an ode to a place that has beguiled sailors and explorers for centuries.
Markus Rex is the head of atmospheric research at the Alfred Wegener Institute for Polar and Marine Research, and a professor of atmospheric physics at the University of Potsdam. He has taken part in numerous expeditions to the Arctic, Antarctica, and other remote regions of the world to research the complex processes that can lead to dramatic changes in the climate. He heads the MOSAiC project, a unique research collaboration by ninety institutions from twenty countries.