The Woman They Could Not Silence: The Shocking Story of a Woman Who Dared to Fight Back (Paperback) 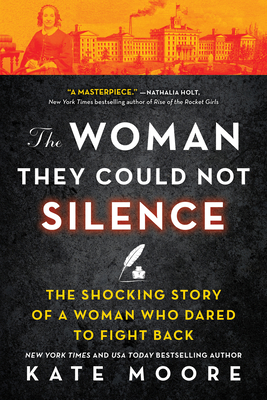 The Woman They Could Not Silence: The Shocking Story of a Woman Who Dared to Fight Back (Paperback)

“As this country waged war against slavery, a quiet heroine fought for the rights of women. A must read for all!”
— Fran Ziegler, Titcomb's Bookshop, East Sandwich, MA

From the New York Times, USA Today, and Wall Street Journal bestselling author of The Radium Girls comes another dark and dramatic but ultimately uplifting tale of a forgotten woman whose inspirational journey sparked lasting change for women's rights and exposed injustices that still resonate today.

"Moore has written a masterpiece of nonfiction."—Nathalia Holt, New York Times bestselling author of Rise of the Rocket Girls

1860: As the clash between the states rolls slowly to a boil, Elizabeth Packard, housewife and mother of six, is facing her own battle. The enemy sits across the table and sleeps in the next room. Her husband of twenty-one years is plotting against her because he feels increasingly threatened—by Elizabeth's intellect, independence, and unwillingness to stifle her own thoughts. So Theophilus makes a plan to put his wife back in her place. One summer morning, he has her committed to an insane asylum.

The horrific conditions inside the Illinois State Hospital in Jacksonville, Illinois, are overseen by Dr. Andrew McFarland, a man who will prove to be even more dangerous to Elizabeth than her traitorous husband. But most disturbing is that Elizabeth is not the only sane woman confined to the institution. There are many rational women on her ward who tell the same story: they've been committed not because they need medical treatment, but to keep them in line—conveniently labeled "crazy" so their voices are ignored.

No one is willing to fight for their freedom and, disenfranchised both by gender and the stigma of their supposed madness, they cannot possibly fight for themselves. But Elizabeth is about to discover that the merit of losing everything is that you then have nothing to lose…

Bestselling author Kate Moore brings her sparkling narrative voice to The Woman They Could Not Silence, an unputdownable story of the forgotten woman who courageously fought for her own freedom—and in so doing freed millions more. Elizabeth's refusal to be silenced and her ceaseless quest for justice not only challenged the medical science of the day, and led to a giant leap forward in human rights, it also showcased the most salutary lesson: sometimes, the greatest heroes we have are those inside ourselves.

"The Woman They Could Not Silence is a remarkable story of perseverance in an unjust and hostile world."—Susannah Cahalan, New York Times bestselling author of Brain on Fire

Kate Moore is the New York Times and USA Today bestselling author of The Radium Girls, which won the 2017 Goodreads Choice Award for Best History, was voted U.S. librarians’ favorite nonfiction book of 2017,and was named a Notable Nonfiction Book of 2018 by the American Library Association. A British writer based in London, Kate writes across a variety of genres and has had multiple titles on the Sunday Times bestseller list. She is passionate about politics, storytelling, and resurrecting forgotten heroes.

"I have waited fifty years for this full-length biography of Elizabeth Parsons Ware Packard, and Kate Moore’s The Woman They Could Not Silence is simply magnificent. It reads like a suspense novel: one is on the edge of her seat at all times; one cannot believe what happens next—and then after that. History comes alive as does the tragedy of women who were falsely judged "mad" and then incarcerated and tortured in 19th century American Insane Asylums. Moore’s research is impeccable. She tells us the whole terrifying and thrilling story: the cost of battle, the triumph of cruel and corrupt misogynists, the nature of feminist victory. It is a complicated story and one brilliantly told. After Packard finally won her own freedom, she fought pioneering battles for the legal rights of both married women and mental patients. This book reads like a movie and it should be made into one." — Phyllis Chesler, bestselling author and feminist leader

"What a story—and what a telling! Kate Moore has hit another one out of the park. In the best tradition of The Radium Girls, Moore recounts the stunning true account of a woman who fought back against a tyrannical husband, a complicit doctor, and 19th-century laws that gave men shocking power to silence and confine their wives. By challenging these norms, Elizabeth Packard became a heroine on the scale of the suffragists. In Moore's expert hands, this beautifully-written tale unspools with drama and power, and puts Elizabeth Packard on the map at the most relevant moment imaginable. You will be riveted—and inspired. Bravo!" — Liza Mundy, New York Times bestselling author of Code Girls

"The Woman They Could Not Silence tells the captivating story of Elizabeth Packard, a forgotten heroine whose harrowing ordeal in an insane asylum seems straight from the mind of Stephen King—except every word is true. Blending impeccable research with novelistic flair, Kate Moore brings the indomitable Packard to brilliant life, and proves she belongs among our most celebrated women leaders." — Abbott Kahler, author (as Karen Abbott) of The Ghosts of Eden Park

"What an incredible narrative about a singular historical woman. In The Woman They Could Not Silence, Kate Moore once again utilizes her astonishing talent in discovering the important, forgotten women of history. In bringing to life the account of Elizabeth Packard, wife and mother of six, Moore shares the stories of many sane women committed to insane asylums simply because they did not abide by the societal expectations about women and the one woman who successfully challenged these practices. Through these pages, Moore enthralls as she ensures that such women will be silent no more." — Marie Benedict, New York Times bestselling author

"This book will fill you with rage, despair, and determination. Moore has written a masterpiece of nonfiction, giving voice to the life of Elizabeth Packard, a crusader of humanity, who countless men tried to subdue. With elegant prose, and an epilogue that will leave you reeling, The Woman They Could Not Silence will linger long after the last page is read." — Nathalia Holt, New York Times bestselling author of Rise of the Rocket Girls

"Heartbreaking and devastatingly important—Kate Moore has a rare gift for combining impeccable research and brilliantly mesmerizing storytelling. The Woman They Could Not Silence yanks back the curtain on the tragic and once-hidden injustices that ruined women's lives—and gives even more power to the one brave and undaunted voice that refused to be silent. You will cry, and then you will cheer, and then your life will be changed forever." — Hank Phillippi Ryan, USA Today bestselling author of The First to Lie and Her Perfect Life

"Told with the urgency and passion of a novel, Kate Moore’s deeply researched and thrilling study of Elizabeth Packard’s fight against the power of psychiatric patriarchy in 19th century America will keep you up at night and illuminate women’s ongoing battles for authority and respect." — Elaine Showalter, literary critic, feminist, and author

"The Woman They Could Not Silence is a remarkable story of perseverance in an unjust and hostile world. This book is rich with detail, powerful, and expertly researched, as Kate Moore describes the near-unbelievable nightmare of an "inconvenient" woman's commitment to a mental hospital and her subsequent fight for freedom against all odds. This book may take place 160 years ago, but it has so much to teach us about gender, misogyny, and medicine today. Thanks to Kate Moore's powerful work, Elizabeth Packard's name will live on in the minds of a new generation of readers." — Susannah Cahalan, New York Times bestselling author of Brain on Fire and The Great Pretender

"Long overdue and completely worth the wait… This unnerving and inspirational saga from the 19th century still resonates with palpable urgency in the 21st. All credit to Kate Moore’s keen research eye and narrative gifts for bringing this ever-relevant story to piercing light, one perfectly suited to this moment in our history." — Denise Kiernan, New York Times bestselling author of We Gather Together