A Farewell to Arms, Legs, and Jockstraps: A Sportswriter's Memoir (Hardcover) 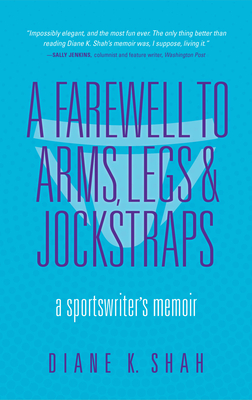 A Farewell to Arms, Legs, and Jockstraps: A Sportswriter's Memoir (Hardcover)

In her memoir A Farewell to Arms, Legs, and Jockstraps, follow Diane's escapades, from interviews with a tipsy Mickey Mantle, to sneaking into off-limits Republican galas, dining with Frank Sinatra, flying a plane with Dennis Quaid, and countless other adventures where she wields her tape recorder and a tireless drive for more.

From skirting KGB agents while covering the Cold War Olympics to hunting down the three mechanical sharks starring in Jaws, Diane's experiences are filled with real heart and a tongue-in-cheek attitude. An insightful look into the difficulties of navigating a male-dominated profession, A Farewell to Arms, Legs, and Jockstraps offers rich retellings and behind-the-scenes details of stories of a trail-blazing career and the prejudices facing female sportswriters during the 60s and 70s.

Diane K. Shah is a former journalist and the first female sports columnist for a major daily newspaper. During her career she has written for The New York Times, Newsweek, GQ, Playboy, and Esquire. She is the author of four mystery novels and author (with Daryl Gates) of Chief: My Life in the LAPD, a New York Times bestseller, and Relentless, photographer Neil Leifer's memoir. She lives in New York City.