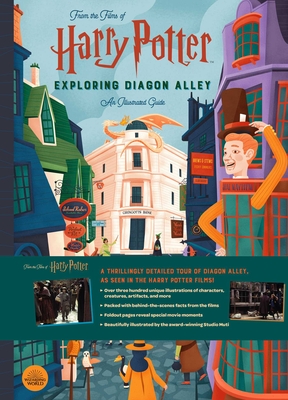 
On Our Shelves Now
A thrillingly detailed tour of Diagon Alley, as seen in the Harry Potter films!

Explore Diagon Alley in gorgeous and intricate full-color illustrations. From the stacked shelves of Ollivanders and Weasleys' Wizard Wheezes to the vaults of Gringotts and beyond, journey through fan-favorite locations seen in the Harry Potter films. In immersive drawings of the magical street, you'll spot iconic scenes, beloved witches and wizards, enchanted artifacts, and more. Along the way, you'll be treated to fascinating facts about the movie magic that brought Harry Potter to life on the big screen.
MUTI is a creative studio based in Cape Town, South Africa, consisting of illustrators, designers and animators who are passionate about producing original and inspiring artwork. Clients include Google, Facebook, Uber, Airbnb, Nike, Goop, Fortnite, and more.

"Head into the bustling Diagon Alley with this detailed tour of the most magical destination young wizards ever dream of visiting."
— Mental Floss

"Beautiful illustrations... Get the inside scoop on Ollivanders, Gringotts and more as you delve into the drawings on this one of a kind street."
— Red Tricycle

"Readers can check out Weasley’s Wizard Wheezes, Gringotts Bank, Ollivanders and so many more of your favorite places"
— Nerds and Beyond

"Designed with care and crafted with insight."
— The Film Stage