Fishing the Wild Waters: An Angler's Search for Peace and Adventure in the Wilderness (Hardcover) 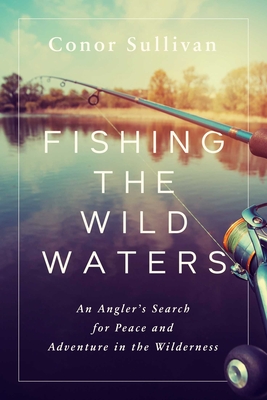 Fishing the Wild Waters: An Angler's Search for Peace and Adventure in the Wilderness (Hardcover)


On Our Shelves Now
From the azure waters of Hawaii to the pristine streams in Alaska to the craggy New England coast, a devoted angler reveals the agony and ecstasy of fishing.

Fishing the Wild Waters invites us to traverse America and visit three distant and distinct dream destinations for any serious angler—and anyone who aspires to someday become one.  Sullivan's marvelous debut illuminates the often profound nature of fishing as a vehicle that connects those who practice it with reverence to a world beyond the one humans created.

As we travel along with Sullivan, he reveals what goes into the pursuit of select fish in the region with humor and personal stories as well as deep knowledge. Hawaii, Alaska and New England are some of the last frontiers of fishing in America. They are full of danger, big fish, and extraordinary adventure. To fish these places is to reach back and stand alongside the First Nations of fishermen—our ancestors who lived there for thousands of years before us—as well as those early Americans who built this country using species like cod as their currency.

These cultural and fishing outposts will tell us something if we can just be quiet and listen. To hear that message requires an intrinsic respect for these ancient fishing grounds and our connection to them. This mindset is in lock-step with a growing movement of anglers who fish these wildest of waters as a way to turn down the noise of modern living and tune into their fundamental, hands-on relationship with the sea, finding not only the solace, but the sustenance the fish provides to those who take the time to learn its lessons. Plus, filling a freezer with the world’s healthiest protein just feels right.

By turns funny, thrilling, and lyric, Fishing the Wild Waters celebrates these special places where each fisherman can pull back the curtain, connect to the sea, and gaze into their own soul – the soul of a fisherman.
A lifelong outdoorsman, writer, artist, and lure craftsman, Conor Sullivan holds a Bachelors in Marine Science from the U.S. Coast Guard Academy, a Masters in Marine Affairs from the University of Rhode Island, as well as a 200-ton Master Mariners license. As a Coast Guard Officer, he served in numerous leadership positions, including as the Commanding Officer of the North Pacific Regional Fisheries Training Center in Kodiak, Alaska, and as the Captain of a Coast Guard Cutter in the North Atlantic, specializing in fisheries conservation, search and rescue, and maritime law enforcement. He and his wife Renee have three wonderful kids who enjoy the wild side of the world as well. When not on the water, you can catch him on social media @sullivanlures.
"A former Coast Guard officer and lifelong outdoorsman takes readers to three of the remaining wild fishing destinations in the United States, in Hawaii, Alaska and New England. Yes, he’s concerned with environmental matters and sustainable consumption, but he’s also after the kind of serenity found when humans connect with the natural world."
— The Washington Post

"In Fishing the Wild Waters [Sullivan] takes us on his mega-adventures. From the seas surrounding Hawaii for marlin to wild streams in Alaska for salmon and to the New England coast for cod, we get all the intimate detail in 'what, when, where and how' dialogue complete with pictures of some great fish. He also includes a section on 'how to' fish in the various exotic locations and how to care for your catch and get it safely home afterwards."
— The Florida Times Union

“When reading Conor Sullivan’s Fishing the Wild Waters, you meet a man who loves the sea and its lore as much as its fish and theirs. Each fish caught is hard-earned through skill, luck, and shameless fun. Sullivan also reminds us that the big waters off Alaska, Hawaii and New England know nothing of obligations. That value belongs uniquely to anglers like Sullivan, who honor alarm clocks long before dawn and rich fillets long before home.”
— Patrick E. Durink, President, Wisconsin Outdoor Communicators Association, MeatEater Wildlife Research Contributor

“I was hooked from the first page, enjoying the blend of the exciting stories mixed with practical fishing advice.  Conor Sullivan is ‘lucky’ fisherman because he put the time in: observing, experimenting, and learning.  Join him on his journey self-discovery while angling for new species.”


— Michael Tougias, New York Times bestselling author of A Storm Too Soon and The Waters Between Us