A Stranger Among Saints: Stephen Hopkins, the Man Who Survived Jamestown and Saved Plymouth (Hardcover) 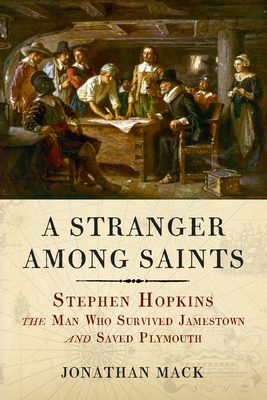 A Stranger Among Saints: Stephen Hopkins, the Man Who Survived Jamestown and Saved Plymouth (Hardcover)

In 1609, on a voyage to resupply England’s troubled Jamestown colony, the Sea Venture was caught in a hurricane and shipwrecked off the coast of Bermuda. The tale of its marooned survivors eventually inspired William Shakespeare’s The Tempest, but for one castaway it was only the beginning.

A Stranger Among Saints traces the life of Stephen Hopkins, who spent ten months stranded with the Sea Venture crew, during which he was charged with attempted mutiny and condemned to die—only to have his sentence commuted just before it was carried out. Hopkins eventually made it to Jamestown, where he spent six years before returning to England and signing on to another colonial venture, this time with a group of religious radicals on the Mayflower.

Hopkins was the only member of the party who had been across the Atlantic before—the only one who’d encountered America’s native people and land. The Pilgrims, plagued by disease and contentious early encounters with indigenous Americans, turned to him for leadership. Hopkins played a vital role in bridging the divide of suspicion between the English immigrants and their native neighbors. Without him, these settlers would likely not have lasted through that brutal first year.

Jonathan Mack is an attorney and an official member of the General Society of Mayflower Descendants. He is a graduate of Harvard Law School and lives in the San Diego area.

“Jonathan Mack has written an unforgettable story of Stephen Hopkins and how his indenture of seven years at Jamestown later helped in the settlement of Plymouth Colony. Bit by bit, Mack extracts from early extant writings an intimate and insightful account of Stephen Hopkins of the Mayflower. Mack tells of Hopkins’s critical role as liaison between the Pilgrims and the Wampanoag tribe with new insight and intimate detail. If you think you knew the story but wish for more, this deeper understanding of Hopkins and his service in the founding of Plymouth Colony will delight you.” —Linda Longley, Historian, California Mayflower Society

“Among the one hundred plus passengers on the Mayflower, only Stephen Hopkins had experienced the hardships of a colonist; only he knew firsthand something of Algonquian culture and language; only he understood the pitfalls of landing outside the group’s patent. Hopkins’s practical knowledge proved crucial to the Plymouth Colony’s survival. Jonathan Mack’s excellent biography is a timely and important contribution to the Pilgrims’ four hundredth anniversary.” —Alden T. Vaughan, Professor Emeritus of History, Columbia University

“We didn’t know enough about Stephen Hopkins, whose enterprising spirit and rapport with Native Americans contributed to the nation’s founding. Mack fills the gap with tireless research and storytelling skills, bringing a complex historical figure to life.” —Amy Finnerty, Culture Writer and Editor