The Conference of the Birds: The Selected Sufi Poetry of Farid Ud-Din Attar (Paperback) 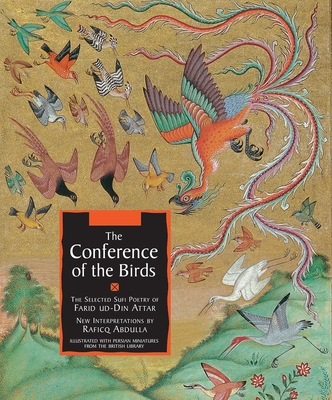 The Conference of the Birds: The Selected Sufi Poetry of Farid Ud-Din Attar (Paperback)


Unavailable
A RICHLY-ILLUSTRATED MYSTICAL CLASSIC . NEW IN PAPERBACK. The Conference of the Birds is a twelfth-century Sufi allegorical poem. The story of the quest for a king undertaken by the birds of the world, it also describes the Sufi (or mystical Islamic) path to enlightenment. Though hugely popular and influential in the Islamic world, the poem is still relatively unfamiliar in the West. In this edition, the poet Raficq Abdulla has reinterpreted key extracts to make the wisdom of Sufism accessible to the contemporary reader. Combining amusing anecdotes and satire with passages of great mystical beauty, the poem uses the birds’ journey to describe the stages of spiritual experience. This edition is richly illustrated with illuminations from Persian manuscripts.
Raficq Abdulla is a South African born Muslim. He has written and presented numerous radio programs about Islam for the BBC, including a series of talks on the Prophet Muhammad and the Four Caliphs, and programs on the life and work of Jalaluddin Rumi. He has written award-winning screenplays for Channel 4 in Britain, poetry and articles for a range of journals, and he is a frequent book reviewer. Raficq Abdulla describes himself as a secular Muslim and a lover of the arts, particularly music and poetry. He is the author of Words of Paradise, a collection of new interpretations of poems by Rumi and has gained popularity as an accomplished public speaker and performer of his own poetry.

"Farid Ud-Din Attar was a thirteenth-century Iranian Sufi poet ...wrote ecstatic verse describing the experience of mysticism. In 'The Conference of Birds', or Manteq ut-Tair, Attar explores the themes of Sufism through an allegorical story of a gathering of birds facing a difficult journey to find the Simurgh, or king of the birds. Some birds never set out, others are lost along the way, and only a few succeed in completing the journey. This particular edition has beautiful illustrations on every page."