The Princess in Black and the Mermaid Princess (Paperback) 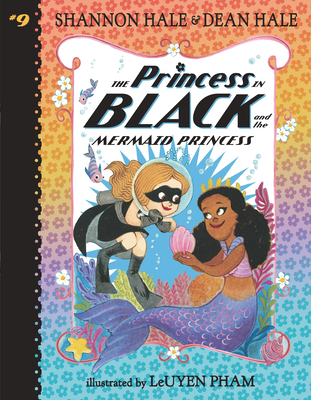 The Princess in Black and the Mermaid Princess (Paperback)

This is book number 9 in the Princess in Black series.

There’s trouble under the sea! Can the Princess in Black and her new mermaid friend put a stop to a big blue kraken’s shenanigans?

The Princess in Black and her friends are enjoying a day of sun and sea on Princess Sneezewort’s royal boat when a real, live mermaid princess emerges from the waves! Eeeeeee! Princess Posy needs their help protecting her very cute sea goats from being eaten by a very greedy kraken. But the princesses and the Goat Avenger quickly realize that fighting underwater can be tough for land dwellers, and only the mermaid Princess Posy can save the day. Can the masked heroes help her learn that being a princess means more than just being nice—it means speaking up? An ode to using your voice (along with a kelp-tree swing or two), this newest installment in the New York Times best-selling series is a splish-splashing good time.
Shannon Hale and Dean Hale are the award-winning husband-and-wife team behind the Princess in Black series, illustrated by LeUyen Pham. Shannon Hale is also the author of the Newbery Honor Book Princess Academy as well as the New York Times best-selling graphic novels Real Friends and Best Friends, illustrated by LeUyen Pham. Shannon Hale and Dean Hale live in Salt Lake City, Utah.

LeUyen Pham is the illustrator of the Princess in Black series as well as many other books for children, including Love Is Powerful, Pat-a-Cake by Mary Brigid Barrett, God’s Dream by Archbishop Desmond Tutu and Douglas Carlton Abrams, Aunt Mary’s Rose by Douglas Wood, and Real Friends and Best Friends by Shannon Hale. LeUyen Pham lives in California.

They’ve done it again! In this ninth installment, the Hales have brought back all the elements young readers love about the “Princess in Black” series—heroes in disguise, hungry monsters, imperiled goats, and ninja skills—but this time, they’ve set their story underwater, added a mermaid princess, and included a powerful message of speaking up to help others. . . young readers will eagerly dive into this latest series adventure.
—School Library Journal (starred review)