A Walk Through the Rain Forest (Hardcover) 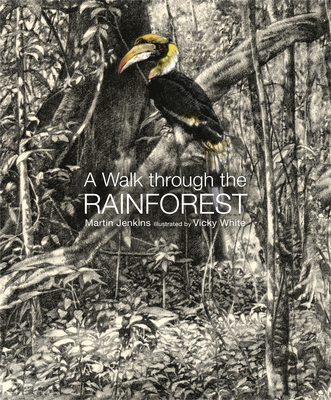 A Walk Through the Rain Forest (Hardcover)


On Our Shelves Now
The award-winning team behind Can We Save the Tiger? and Ape invites young readers to explore the breathtaking biodiversity of a Malaysian tropical rain forest.


Conservation biologist Martin Jenkins and acclaimed fine artist Vicky White expertly guide readers into the complex ecosystem of Malaysia’s Taman Negara. Conversational prose and photorealistic black-and-white artwork—punctuated by four jaw-dropping full-color spreads—evoke the whir of cicadas and the low call of a pheasant. Pages fill with ants and elephants, leopards and hornbills, gibbons and bats, as animals spread and fertilize seeds to help maintain a magnificent old-growth forest. Every living thing in the rain forest is interconnected, and a dazzling full-color index guide at the end of the book challenges readers to circle back and marvel at animals they may have missed in the dense foliage. Meticulously researched and visually arresting, this creative tour de force is a young conservationist’s dream: the ecotour of a lifetime.
Martin Jenkins is a conservation biologist and the award-winning author of many books for children, including The Emperor’s Egg, illustrated by Jane Chapman; A World of Plants, illustrated by James Brown; and Under Threat: An Album of Endangered Animals, illustrated by Tom Frost. Martin Jenkins lives in Cambridge, England.

Vicky White worked as a zookeeper for several years before earning an MA in natural history illustration from London’s Royal College of Art. She is the illustrator of two other books written by Martin Jenkins: Ape, which won an ASPCA Henry Bergh Illustration Award, and Can We Save the Tiger?, which was short-listed for the Kate Greenaway Medal. Vicky White lives in Suffolk, England.
This arresting tour through a Malaysian rain forest is most notable for its spectacular illustrations. Photorealistic scenes, created with pencil and oil paint, are dense with detail. Most appear in grayscale but full color is also deployed, its impact all the greater for the contrast it creates with its monochrome counterparts. . . Readers will absorb the fact-laden text with ease. . . and come away with a genuine appreciation of these unique habitats.
—Booklist (starred review)

This book is a rare find: a great nonfiction book that is also a perfect choice for a read-aloud. The conversational prose reads like the author is guiding you on a walk through the Taman Negara rain forest in Malaysia. As you turn the pages the text guides you to notice the sights and sounds of the animals and plants depicted in the immersive and detailed illustrations.
—School Library Connection

Considering the forest here is the Taman Negara tropical rainforest in Malaysia, the titular walk promises to be an intriguing one. . . Jenkins’ easy, conversational tone, and White’s stunningly photorealistic paint and pencil mise en scène transform the shadowy, unfamiliar rainforest into an inviting milieu—wondrous but not too mysterious for a primary schooler to begin to grasp.
—The Bulletin of the Center for Children's Books

This rare picture book is both an evocative read-aloud and an intriguing visual journey that invites repeated looks.
—The Virginian Pilot