When We Were Infinite (Hardcover) 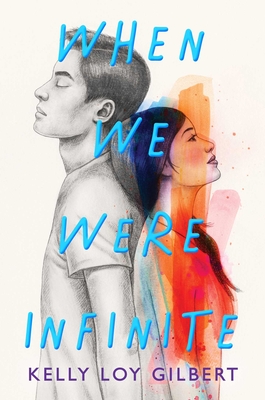 When We Were Infinite (Hardcover)


In stock at our warehouse - Ships in 5-12 business days
From award-winning author Kelly Loy Gilbert comes a “beautifully, achingly cathartic” (Kirkus Reviews, starred review) romantic drama about the secrets we keep, from each other and from ourselves, perfect for fans of Permanent Record and I Am Not Your Perfect Mexican Daughter.

All Beth wants is for her tight-knit circle of friends—Grace Nakamura, Brandon Lin, Sunny Chen, and Jason Tsou—to stay together. With her family splintered and her future a question mark, these friends are all she has—even if she sometimes wonders if she truly fits in with them. Besides, she’s certain she’ll never be able to tell Jason how she really feels about him, so friendship will have to be enough.

Then Beth witnesses a private act of violence in Jason’s home, and the whole group is shaken. Beth and her friends make a pact to do whatever it takes to protect Jason, no matter the sacrifice. But when even their fierce loyalty isn’t enough to stop Jason from making a life-altering choice, Beth must decide how far she’s willing to go for him—and how much of herself she’s willing to give up.
Kelly Loy Gilbert believes deeply in the power of stories to illuminate a shared humanity and give voice to complex, broken people. She is the author of Conviction, a William C. Morris Award finalist, Picture Us in the Light, and When We Were Infinite and lives in the SF Bay Area. She would be thrilled to hear from you on Twitter @KellyLoyGilbert or at KellyLoyGilbert.com.
* "Beautifully, achingly cathartic."
— Kirkus Reviews, starred review

* "Gilbert is a master writer in the YA arena, and this book adds to her impressive oeuvre."
— Booklist, starred review

“Gilbert captures the intensity and electricity of the end of adolescence in this astonishing book that expands what the entire category of YA literature can be.”
— BookPage Best YA Books of 2021