Fastpitch: The Untold History of Softball and the Women Who Made the Game (Paperback) 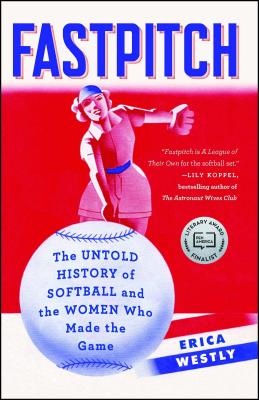 Fastpitch: The Untold History of Softball and the Women Who Made the Game (Paperback)


On Our Shelves Now
“A League of Their Own for the softball set” (Lily Koppel, bestselling author of The Astronaut Wives Club), Fastpitch is hidden history at its most intriguing—the tale of the forgotten beginnings of one of the most popular and widely played sports today.

Softball is played by tens of millions in various age groups all around the world, but the origins of this beloved sport (and the charismatic athletes who helped it achieve prominence in the mid-twentieth century) have been shrouded in mystery…until now.

Fastpitch brings to vivid life the eclectic mix of characters that make up softball’s vibrant 129-year history. From its humble beginnings in 1887, when it was invented in a Chicago boat club and played with a broomstick, to the rise in the 1940s and 1950s of professional-caliber, company-sponsored teams that toured the country in style, softball’s history is as varied as it is fascinating. Though it’s thought of today as a female sport, fastpitch softball’s early history is full of male stars, such as the vaudeville-esque Eddie Feigner, whose signature move was striking out batters while blindfolded.

But because softball was one of the only team sports that also allowed women to play competitively, it took on added importance for female athletes. Women like Bertha Ragan Tickey, who set strikeout records and taught Lana Turner to pitch, and her teammate Joan Joyce, who struck out baseball star Ted Williams, made a name—and a life—for themselves in an era when female athletes had almost no prospects. Softball allowed them to flourish, and they in turn inspired a whole new generation of athletes.

Featuring eight pages of captivating, vintage photos and compelling, well-researched historical commentary, this “fun and entertaining read” (Billie Jean King) chronicles softball’s unique history as well as its uncertain future (as evidenced by its controversial elimination from the 2012 Olympics, and the mounting efforts to have it reinstated). A celebration of this distinctively American game and the role it plays in our culture today, Westly has written “a must-read for anyone who loves the sport” (Jonathan Fader, author of Life as Sport).
Erica Westly is a journalist whose work has appeared in Slate, Wired, The Smart Set, Self, Esquire, Popular Science, and The New York Times. Fastpitch is her first book.