The Edge of Lost (Paperback) 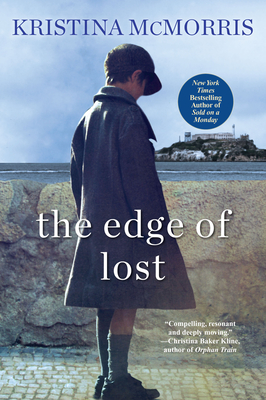 The Edge of Lost (Paperback)


In stock at our warehouse - Ships in 5-12 business days
From bestselling author Kristina McMorris comes an ambitious and heartrending story of immigrants, deception, and second chances.

On a cold night in October 1937, searchlights cut through the darkness around Alcatraz. A prison guard’s only daughter—one of the youngest civilians who lives on the island—has gone missing. Tending the warden’s greenhouse, convicted bank robber Tommy Capello waits anxiously. Only he knows the truth about the little girl’s whereabouts, and that both of their lives depend on the search’s outcome.

Almost two decades earlier and thousands of miles away, a young boy named Shanley Keagan ekes out a living in Dublin pubs. Talented and shrewd, Shan dreams of shedding his dingy existence and finding his real father in America. The chance finally comes to cross the Atlantic, but when tragedy strikes, Shan must summon all his ingenuity to forge a new life in a volatile and foreign world.

Skillfully weaving these two stories, Kristina McMorris delivers a compelling novel that moves from Ireland to New York to San Francisco Bay. As her finely crafted characters discover the true nature of loyalty, sacrifice, and betrayal, they are forced to confront the lies we tell—and believe—in order to survive.

“Will grab your heart on page one and won’t let go until the end.
I absolutely love this book, and so will you.”
—Sara Gruen, #1 New York Times bestselling author of Water for Elephants

“An absorbing, addictive read.”
—Beatriz Williams, New York Times bestselling author
Kristina McMorris is a New York Times and USA Today bestselling author. Her background includes ten years of directing public relations for an international conglomerate as well as extensive television experience. Inspired by true personal and historical accounts, her novels have garnered twenty national literary awards and include Letters from Home, Bridge of Scarlet Leaves, The Pieces We Keep, The Edge of Lost, and Sold on a Monday, in addition to novellas in the anthologies A Winter Wonderland and Grand Central. A frequent guest speaker and workshop presenter, she holds a BS in international marketing from Pepperdine. She lives with her husband and two sons in Oregon. For more, visit KristinaMcmorris.com.
“Kristina McMorris evokes such a strong sense of place that to open her books feels less like reading and more like traveling.  Her absorbing new novel..[is an] epic, deeply felt tale of struggle and second chances… a transporting piece of historical fiction.” —BookPage

“[A] gripping immigrant saga…it is also a portrait of America during a turbulent time and a quest that ends in triumph. Readers will be caught up in this well-told story.” —RT Book Reviews, 4 Stars

“Beautifully written with mesmerizing details, this is one of those books that sticks with a reader… extensively researched and the historical images are incredibly accurate… an absolute must-have.” —VOYA Magazine

“In terms of both the character and the era, McMorris took a chance, and she succeeded. And the careful plotting—another McMorris hallmark—pays off in an absorbing story. The Edge of Lost is about taking—and making—chances. A satisfying read.” —Kitsap Sun

"McMorris manages to pack this book with all the messiness and nuances of a life. Her vivid descriptions and use of language make you feel like the fly on the wall...I heartily recommend embarking on this journey." —The Daily Herald

“Grabs readers from the very start and doesn't let up until the dynamic conclusion. The Edge of Lost is another work of genius by the talented Kristina McMorris.” —Fresh Fiction

PRAISE FOR THE NOVELS OF KRISTINA McMORRIS

The Pieces We Keep
“The past collides with the present in this sensitive and multilayered story where the discovery of long-held family secrets leads to healing. The contemporary twist will be a treat for fans of World War II historical fiction.” —Beth Hoffman, New York Times bestselling author of Looking for Me and Saving CeeCee Honeycutt

“McMorris’ strong pacing keeps the two stories zipping along and all its many strings connected for a gratifying conclusion.” —Kirkus Reviews

“Readers of World War II fiction will devour Kristina McMorris's Bridge of Scarlet Leaves, a poignant, authentic story of Japanese and American lovers crossed not only by the stars but by the vagaries of war and their own country's prejudices.” —Jenna Blum

“A tender and heartfelt glimpse of a time long past. While wholly original, it's filled with characters as beloved as your own grandparents. Propelled by the epic sweep of world war, yet warmed by intimate human moments, this story will linger in the reader's memory long after the last page is turned.”  —Susan Wiggs