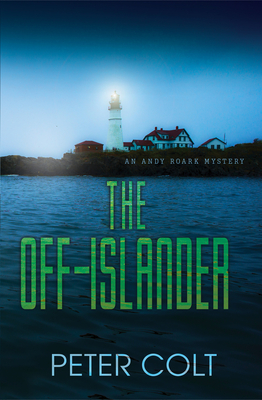 This is book number 1 in the An Andy Roark Mystery series.

In Peter Colt’s gritty, gripping new series set along the New England coast, a Boston-born Vietnam veteran  and P.I. is hired to find a missing father—but may find far more than he bargained for . . .

Boston, 1982. Private investigator Andy Roark has spent the past decade trying to rediscover his place in the world. In Vietnam, there was order and purpose. Everything—no matter how brutal—happened for a reason. Back home, after brief stints in college and with the police force, Roark has settled for a steady, easy routine of divorce and insurance fraud cases.

Roark’s childhood friend, Danny Sullivan, dragged himself out of blue-collar Southie to become a respected and powerful lawyer. Now he wants Roark to help one of his clients with a sensitive request. Deborah Swift, wealthy wife of an aspiring California politician, is trying to trace her father, last seen on Cape Cod, who walked out on her and her mother long ago. Other investigators have turned up nothing, but Roark’s local connections might give him an edge.

The case takes Roark to the island of Nantucket, tranquil in its off-season, and laden with picturesque charm. Yet even here, on the quaint cobblestoned streets and pristine beaches, Roark’s finely honed senses alert him to danger just below the surface. Nothing is quite as it seems. And the biggest case of Roark’s career may just shatter what little peace of mind he has left . . .
Peter Colt is currently a police officer in a small New England city where he has worked since 2007. He spent over twenty years in the Army reserve and was deployed to Kosovo in 2000, where he was attached to the Russian Army. He was deployed to Iraq in 2003 and again in 2008. He was fortunate to get to know many Vietnam vets and U.S. Army Special forces soldiers. He lived on Nantucket Island from 1973‑1986. He’s currently working on the next Andy Roark mystery.

Advance praise for Peter Colt and The Off-Islander

“If you like your mysteries to be old-school in the vein of John D. MacDonald, or even farther back to Raymond Chandler or Dashiell Hammett, then you will appreciate this striking debut by Peter Colt. Long on atmosphere, detail, and character, it could place detective Andy Roark amongst the classic noir sleuths.”
—Raymond Benson, author of Blues in the Dark

“Where were you in 1982? Peter Colt’s The Off-Islander is much more than a period piece. Colt’s maiden effort introduces P.I. Andy Roark trying to locate a mysterious missing person. The closer this former Vietnam vet gets to finding his mystery man, the more people seem to want him dead. Colt knows the terrain, and the character, and has the personal background to make the most out of them. The Off-Islander is a gripping debut, and readers will certainly want more.”
—Alan Russell, author of Gideon’s Rescue