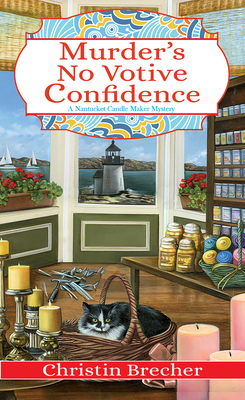 This is book number 1 in the Nantucket Candle Maker Mystery series.

Nantucket candle store owner Stella Wright specializes in creating unique candles for every occasion. But someone sets the stage for murder when a Memorial Day celebration becomes a wedding to die for . . .

Jessica Sterling’s candlelight-themed nuptials promises to be the perfect kick-off to the summer’s first official holiday weekend. Stella’s thrilled to have been chosen to provide the decorative centerpiece for the wedding ceremony: a two-foot-tall scented unity candle—a symbol of the happy couple’s love. But it looks like the bride-to-be’s uncle won’t be walking his niece down the aisle after he’s found dead. The murder weapon is Stella’s seemingly indestructible candle, now split in two.

When a beloved local bartender is arrested, Stella’s sure a visiting police captain running the case made a rush to justice. With superstitious brides-to-be canceling orders and sales waxing and waning at her store, the Wick & Flame owner decides to do some sleuthing of her own. Abetted by a charming reporter and challenged by the town’s sexiest cop, Stella’s determined to shine a light on the truth and uncover a killer who’s snuffing out her own flame.
Christin Brecher was born and raised in NYC, where her family and many childhood friends still reside. As such, she feels she is as much of a small-town girl as any. The idea to write the Nantucket Candle Maker series sprang from her life-long connection to the small island off the coast of Massachusetts. Spending summers there as a child, Christin read from her family’s library of mystery novels, after which she began to imagine stories inspired by the island’s whaling heyday, its notoriously foggy nights, and during long bike rides to the beach. After many years in marketing for the publishing industry, followed by years raising her children, Murder’s No Votive Confidence is Christin’s debut novel. Visit her at www.christinbrecher.com.

Praise for Murder’s No Votive Confidence

“A cozy with candles, conspiring couples, and a cat—what could be a better combination? Christin Brecher’s debut mystery has all those and more.”
—Kaitlyn Dunnett, author of Clause & Effect

"A scentsational new series! Christin Brecher’s charming debut, Murder’s No Votive Confidence, glows with a seaside location, a candle shop, and a kitty that will melt your heart. Interesting characters and a twisting plot will keep you intrigued to the very end."
—Krista Davis, author of The Diva Sweetens the Pie

“A charmingly fun whodunnit with plenty of twists and turns and delightfully quirky characters. Murder’s No Votive Confidence had me hooked from the first pages.”
—Kirsten Weiss, author of Bleeding Tarts

“A charming mystery with believable, likeable characters. Check it out.”
—Suspense Magazine