There's a Porcupine in My Outhouse: The Vermont Misadventures of a Mountain Man Wannabe (Paperback) 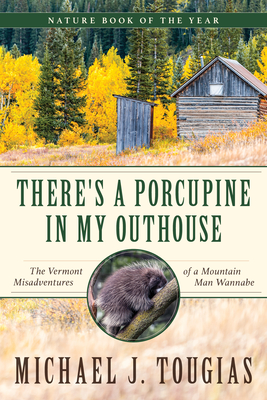 There's a Porcupine in My Outhouse: The Vermont Misadventures of a Mountain Man Wannabe (Paperback)


On Our Shelves Now
NATURE BOOK OF THE YEAR Sequel to the author's new book, The Waters Between Us (Lyons, March, 2021), about growing up loving the woods and fields and streams of his native Massachusetts and wanting since boyhood to live like a mountain man in the woods. Having acquired a forest cabin in the course of the first book, There's a Porcupine in my Outhouse details his further adventures hunting and fishing far from other humans. PRAISE FOR THERE'S A PORCUPINE IN MY OUTHOUSE "This is the way natural history should be taught--by a good storyteller with a sense of humor." --Audubon Magazine "Tougias recounts his experiences with candor and humor. He blends the adventures of Lewis and Clark with the vision of John Muir." --Cape Cod Times "A very funny memoir. Tougias learned from his cabin experience and today he is one of New England's leading nature writers." --Book Views "This is an honest book that asks us to admit our ignorance of much of the natural process and our fears of all those unknown things that 'go bump in the night' when we visit friends in the country. Tougias tempers each small disaster with good humor and a growing love for a world that he at first finds completely foreign, but which he ultimately realizes he cannot part with." --Bill Eddy, author of The Other Side of the World Here are Michael Tougias' adventures at a tiny A-frame cabin in Northern Vermont where he learns that nature has a way of becoming our instructor. This funny, honest, and personal account is the perfect book for anyone who loves the outdoors and loves to laugh.
Michael Tougias is a writer who was born in Longmeadow, Massachusetts in 1955. He writes about maritime, travel, and adventure topics. He is a N.Y. Times Bestselling author of 25 books. An avid fisherman, Tougias became a self-syndicated outdoors writer in 1990. At the time he was also managing a division of a major insurance company. He published the first of his books in 1998. He travels to more than 100 small and large speaking engagements a year to discuss his books and other topics, including Survival Stories, lessons learned from those who were shipwrecked. U.S. Coast Guardsmen and sailors are frequent audiences; Tougias' last six books have been accounts of historic sea rescues by the Coast Guard, often in the Gulf Stream. His book The Finest Hours: The True Story Behind the US Coast Guard's Most Daring Rescue (2009), co-authored with Casey Sherman, was adapted as a Disney film by the same name, released in 2016. Tougias is a frequent guest on NPR programs, The Weather Channel, Fox & Friends, 20/20, and national talk shows. He lives in Mendon, MA and Hobe Sound, FL.