The Waters Between Us: A Boy, a Father, Outdoor Misadventures, and the Healing Power of Nature (Hardcover) 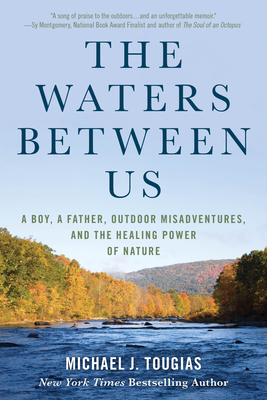 The Waters Between Us: A Boy, a Father, Outdoor Misadventures, and the Healing Power of Nature (Hardcover)


In stock at our warehouse - Ships in 5-12 business days
Untamed. Unsupervised. Uncontrolled. Boyhood in the 1960s and '70s was a time for exploration and mischief. Author Michael Tougias found more than his share of misadventures in the woods and on the water: some life-threatening but others innocently hilarious. Over time - and after reading a multitude of adventure books -- these experiences took shape in his quest to be a mountain man, owning a cabin in the forest and living off the land. Part of that dream would come true, but only after a family tragedy that shook his world and forced changes in his life. This is also a story of a complex and strained relationship between father and son, the efforts at understanding, and ultimately respect and devotion. In The Waters Between Us Tougias channels Bryson's "A Walk in the Woods" to mix laugh out loud humor with insight into the natural world through the eyes of a curious boy. Tougias is a New York Times Bestselling author and co-author of 31 books, including There's A Porcupine In My Outhouse (Winner of the Independent Publishers "Best Nature Book of the Year") and The Finest Hours (inspiration for a 2016 Disney movie). He has received many writing awards.
Michael Tougias is a writer who was born in Longmeadow, Massachusetts in 1955. He writes about maritime, travel, and adventure topics. He is a N.Y. Times Bestselling author of 25 books. An avid fisherman, Tougias became a self-syndicated outdoors writer in 1990. At the time he was also managing a division of a major insurance company. He published the first of his books in 1998. He travels to more than 100 small and large speaking engagements a year to discuss his books and other topics, including Survival Stories, lessons learned from those who were shipwrecked. U.S. Coast Guardsmen and sailors are frequent audiences; Tougias' last six books have been accounts of historic sea rescues by the Coast Guard, often in the Gulf Stream. His book The Finest Hours: The True Story Behind the US Coast Guard's Most Daring Rescue (2009), co-authored with Casey Sherman, was adapted as a Disney film by the same name, released in 2016. Tougias is a frequent guest on NPR programs, The Weather Channel, Fox & Friends, 20/20, and national talk shows. He lives in Mendon, Massachusetts and Hobe Sound, Florida.