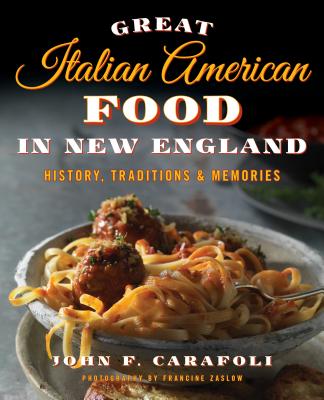 
On Our Shelves Now
Explore the Italian enclaves in different parts of the six states and the evolution of Italian heritage cuisine. What part of Italy did the immigrants come from? How did they adapt recipes and use new ingredients? How did those recipes evolve over the years? Included are profiles of the people, places, and communities that made the largest impact and interviews with descendants including: local chefs, famous pizzeria owners, Italian butchers, home cooks, celebrities, and specialty shops purveyors. Alongside these stories is a mix of historical and modern photos as well as more than 50 classic recipes passed down through generations and some from establishments that still thrive today. Part historical record, part travelogue, part cookbook, Great Italian American Food in New England is fascinating glimpse into this rich New England heritage.
John F. Carafoli is an international food stylist, consultant, food writer and wrote the seminal book Food Photography and Styling, two children's cookbooks, Look Who's Cooking, The Cookie Cookbook and Cape Cod Chef's Table, Recipes from Buzzards Bay to Provincetown. He has been published in Gastronomica, The Journal of Food and Culture, The New York Times, The Boston Globe, Edible Cape Cod where he won an EDDY for Best use of Recipes in a feature and has been profiled in the Italian publication of ER (Emilia Romagna). In addition to presenting papers at the Oxford Symposium on Food and Cookery in England, he has organized the biannual International Conference on Food Styling and Photography at Boston University. Carafoli was also featured on the TV Food network's Ultimate Kitchens, and NPR. He also conducts culinary food, music and culture tours to Italy. Carafoli lives in West Barnstable MA and can be found in the waters during the winter months gathering fresh oysters and clams. Visit him at www.carafoli.com.