Insignificant Events in the Life of a Cactus: Volume 1 (Paperback) 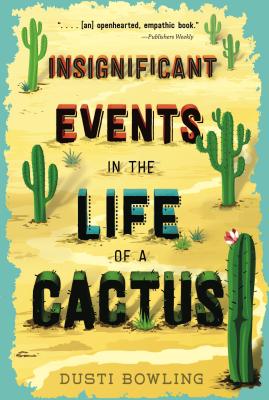 Insignificant Events in the Life of a Cactus: Volume 1 (Paperback)

By Dusti Bowling
List Price: $8.95
Our Price: $7.95
(Save: $1.00 11%)
On Our Shelves Now
"Aven is a perky, hilarious, and inspiring protagonist whose attitude and humor will linger even after the last page has turned." --School Library Journal (Starred review) The paperback edition of the bestselling middle grade novel about a spunky girl born without arms and a boy with Tourette syndrome navigating the challenges of middle school, disability, and friendship--all while solving a mystery in a western theme park. Aven Green loves to tell people that she lost her arms in an alligator wrestling match, or a wildfire in Tanzania, but the truth is she was born without them. And when her parents take a job running Stagecoach Pass, a rundown western theme park in Arizona, Aven moves with them across the country knowing that she'll have to answer the question over and over again. Her new life takes an unexpected turn when she bonds with Connor, a classmate who also feels isolated because of his own disability, and they discover a room at Stagecoach Pass that holds bigger secrets than Aven ever could have imagined. It's hard to solve a mystery, help a friend, and face your worst fears. But Aven's about to discover she can do it all . . . even without arms. Autumn 2017 Kids' Indie Next Pick
Junior Library Guild Selection
Library of Congress's 52 Great Reads List 2018
Dusti Bowling holds a Bachelor of Psychology and a Master of Education, but her true passion is writing. She is the author of the well-reviewed 24 Hours in Nowhere (Sterling); The Day We Met, her self-published YA novel, sold over 20,000 copies. She currently lives in Carefree, AZ, with her husband, three daughters, one bobcat, a pack of coyotes, a couple of chuckwallas, several rattlesnakes, and a few herds of javelina.