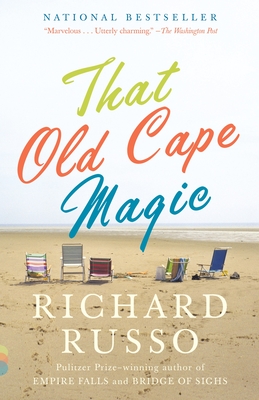 “Jack Griffin doesn't have fond memories of his parents, two college professors who were too often careless of one another's feelings and dismissive of the world at large. Now a middle-age married man himself, Griffin wants to be anything but like them, yet now his own marriage is disintegrating. Russo's latest novel captures exactly the ways we fool ourselves and make fools of ourselves as we grope for truth, and it shows the grace truth can provide should we ever manage to recognize it.”
— Betsy Burton, The King's English, Salt Lake City, UT

For Griffin, all paths, all memories, converge at Cape Cod.  The Cape is where he took his childhood summer vacations, where he and his wife, Joy, honeymooned, where they decided he’d leave his LA screenwriting job to become a college professor, and where they celebrated the marriage of their daughter Laura’s best friend. But when their beloved Laura’s wedding takes place a year later, Griffin is caught between chauffeuring his mother’s and father’s ashes in two urns and contending with Joy and her large, unruly family. Both he and she have also brought dates along. How in the world could this have happened?

By turns hilarious, rueful, and uplifting, That Old Cape Magic is a profoundly involving novel about marriage, family, and all the other ties that bind.
Richard Russo lives with his wife in Camden, Maine, and in Boston. In 2002 he was awarded the Pulitzer Prize for Empire Falls.

“In one of America’s most mythic landscapes, Russo details one man’s shaky first steps out of his past and into self-knowledge with good humor, generosity, and an open heart.” —O, The Oprah Magazine

“His most intimate yet: an astute portrait of a 30-year marriage, in all its promise and pain. . . . His honest, heartfelt storytelling—like a cooling breeze off a certain New England shoreline—has never felt fresher.” —People

“A fine book about parents and children, about remembering and forgetting, and ultimately what it means to be a grown-up.”  —The San Francisco Chronicle

“When we finish reading That Old Cape Magic, we know we’ll start rereading it soon. And that the characters will come to mind at the most unpredictable times. We will stay on speaking terms with them more than we do with some of our real-life cousins.” —The Miami Herald

“Suffused with Russo’s signature comic sensibility, and with insights, by turns tender and tough, about human frailty, forbearance, fortitude, and fervor.” —The Boston Globe

“Russo has a great sense of humor, of the absurd, and of the intricate, constantly shifting, complex emotional levels of his characters. . . . The way Russo plumbs their depths are wonderful.  Incidents and episodes charm and sparkle.”  —The Providence Journal

“Does not disappoint. . . . [With] deep connection to place, and affection for the large cast of characters who blunder and struggle through his pages.” —The New York Times Book Review

“[With] elegant writing. . . . Few novelists exude as much wry compassion as Russo.”  —The Christian Science Monitor

“This is a thinking person’s novel. . . . [Russo’s] prose is thought-provoking and guaranteed to make you examine your relationships with your parents, your spouse and your children.”  —The City Wire

“Effortlessly emotional . . . so awash in seriously comic and tragic but always brutally honest moments. . . . A beautiful depiction of how people think, how we convince ourselves that we are the center of our universe, and that things don’t just happen but are ‘done,’ often to or for us.”  —Pop Matters

“Russo is an apt and sensitive storyteller, and his prose is generously sprinkled with insights into everyday life.”  —Daily Herald

“Tender and heartening. . . . Full of humor and pathos. . . . A deeply mature novel that deals with marriage and aging so gracefully.”  —San Antonio Express-News

“Russo is a sensitive, intelligent writer. . . . It’s always a pleasure to read his smooth prose and inhabit his characters’ conflicted minds.”  —The San Jose Mercury News

“A comic yet thoughtful take on marriage. . . . But amid the humor, it raises questions about the complications we inherit and the ones we build for ourselves.” —USA Today

“A recipe for laying ghosts to rest [and] a tale about love requited and unrequited. Finally, it is a big-hearted book about real, complex relationships that are an utterly fascinating mix of the two.” —Bangor Daily News