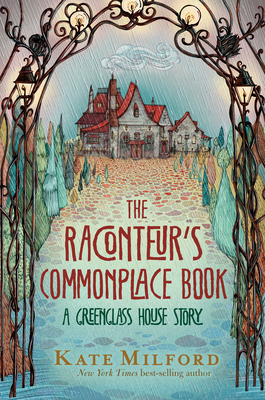 In this standalone mystery set in the world of the New York Times bestselling Greenglass House by an Edgar Award–winning author, a group of strangers trapped in an otherworldly inn slowly reveal their secrets, proving that nothing is what it seems and there's always more than one side to the story.

The rain hasn't stopped for a week, and the twelve guests of the Blue Vein Tavern are trapped by flooded roads and the rising Skidwrack River. Among them are a ship’s captain, tattooed twins, a musician, and a young girl traveling on her own. To pass the time, they begin to tell stories—each a different type of folklore—that eventually reveal more about their own secrets than they intended.

As the rain continues to pour down—an uncanny, unnatural amount of rain—the guests begin to realize that the entire city is in danger, and not just from the flood. But they have only their stories, and one another, to save them. Will it be enough?

Kate Milford is the New York Times best-selling author of the Edgar Award–winning, National Book Award nominee Greenglass House, as well as Ghosts of Greenglass House, Bluecrowne, The Thief Knot, and many more. She lives with her family in Brooklyn, New York. www.greenglasshousebooks.com and www.katemilfordwritesbooks.com,
Twitter: @KateMilford

"The wide-reaching world building of Milford’s Nagspeake novels gets even more expansive. The stories are purely enjoyable, playfully toying with folktale conventions, offering a compelling variety of genres, and allowing each teller’s voice to clearly come through in their tale." — Booklist

"At times wryly humorous and at others marvelously unnerving and superbly menacing, this novel delights. Deliciously immersive and captivating." — Kirkus Reviews (starred review)

"At once a deeply satisfying standalone and a smart addition to Milford’s expansive world, this elegant feat of telescopic storytelling serves as both map and key, offering singular stories of consequence that slowly, artfully reveal an immersive mystery—one that will dazzle seasoned Milford fans and kindle new ones." — Publishers Weekly (starred review)

"Intricately written, gorgeously crafted, and captivating from start to finish, The Raconteur's Commonplace Book is the kind of title that remains in your heart." — Locus

"If the Canterbury Tales were filled to the brim with magic and mystery, you couldn’t find a better collection than what Milford has produced here." — Betsy Bird, Fuse #8