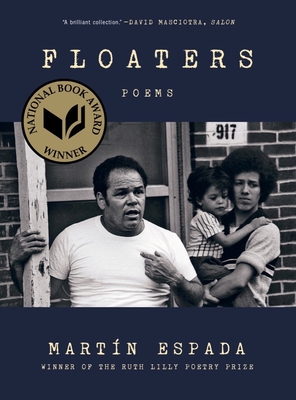 Winner of the 2021 National Book Award for Poetry

From the winner of the Ruth Lilly Poetry Prize come masterfully crafted narratives of protest, grief and love.

Martín Espada is a poet who "stirs in us an undeniable social consciousness," says Richard Blanco. Floaters offers exuberant odes and defiant elegies, songs of protest and songs of love from one of the essential voices in American poetry.

Floaters takes its title from a term used by certain Border Patrol agents to describe migrants who drown trying to cross over. The title poem responds to the viral photograph of Óscar and Valeria, a Salvadoran father and daughter who drowned in the Río Grande, and allegations posted in the "I’m 10-15" Border Patrol Facebook group that the photo was faked. Espada bears eloquent witness to confrontations with anti-immigrant bigotry as a tenant lawyer years ago, and now sings the praises of Central American adolescents kicking soccer balls over a barbed wire fence in an internment camp founded on that same bigotry. He also knows that times of hate call for poems of love—even in the voice of a cantankerous Galápagos tortoise.

The collection ranges from historical epic to achingly personal lyrics about growing up, the baseball that drops from the sky and smacks Espada in the eye as he contemplates a girl’s gently racist question.

Whether celebrating the visionaries—the fallen dreamers, rebels and poets—or condemning the outrageous governmental neglect of his father’s Puerto Rico in the wake of Hurricane María, Espada invokes ferocious, incandescent spirits.

Martín Espada has published more than twenty books as a poet, editor, essayist and translator, including Vivas to Those Who Have Failed and Pulitzer finalist The Republic of Poetry. His many honors include the Ruth Lilly Prize, the Shelley Memorial Award, and a Guggenheim Fellowship. Born in Brooklyn, he now lives in western Massachusetts.

A work of grace-laden defiance... Espada lands jabs of bright, hard wisdom... The verve and force of this poet's long career [are alive in Floaters].

Both elegiac and irrepressible, this is an essential read for anyone interested in poetry as a form of protest.
— Chicago Review of Books

The visionary latest from Espada combines a sharp political awareness with a storyteller's knack for finding beauty and irony in the current moment... Drawing on history, personal experience, and keen observation, this impressive collection is unique for the way it captures the world-weary voice of a poet and political activist who doesn't simply call for change, but offers a sense of the long, difficult struggle toward justice.
— Publishers Weekly

Vintage Espada—essential, topical, political, irrepressible; in his poems, mercy acquires muscle and close attention confers value—reminding us that protest and praise rise from the same source. Such eloquence in comradeship, elegy and homage to those who lit the path, and, oh, a fresh bounty of love poems, written 'not in lust but in astonishment.'
— Eleanor Wilner

Along with his trademark blend of gravitas, humor and raucous imagination, we get an Espada more vulnerable, a voice more intimate, than any we’ve heard from him before. Martín Espada has long established himself as one of our most prolific and important poets, his body of work a canon unto itself. Floaters is another cannon in that canon.

In his dynamic new book, Martín Espada is a fierce activist in verse, decrying, with accuracy and urgency, the depravity of inhumane detention and acute bigotry. One of America’s most indelible voices, as always, Espada’s poetry is lionhearted.
— Cyrus Cassells

If Martín Espada’s name weren’t on the book, I would still recognize the poems as his, the stories that so exactly capture the shaping moments of his life and the lives of others, resonant, particular and yet universal, rendered into a lovely, unique lyricism—with a hard-won maturity. The title poem does what Espada is called to do, naming the dead, saving the memory of their lives. This book disturbs in the best way, and still it sings.
— Wayne Karlin