Where It All Lands: A Novel (Hardcover) 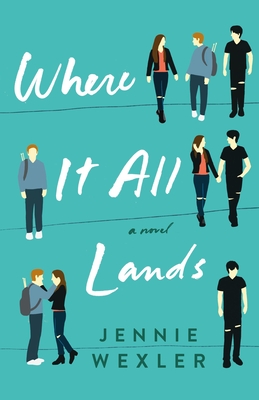 Where It All Lands: A Novel (Hardcover)

"For fans of Sarah Dessen and Rainbow Rowell, a moving story about loss and love and finding out who you really are.” - Paige McKenzie, New York Times Best Selling author of The Haunting of Sunshine Girl

A sob-worthy yet hopeful novel that reveals how our choices define us and how no matter the road, love finds a way.

Stevie Rosenstein has never fallen in love. Constantly moving from city to city for her father's job, she can’t allow herself to grow truly close to someone. The pain of leaving hurts too much.

Until she meets Drew…
And Shane.

Drew and Shane have been best friends through everything. The death of Shane's dad. The separation of Drew's parents. No matter what happens, they always have each others' backs.

But when Stevie moves to town, a simple coin toss alters the course of their year in profound and unexpected ways – a ripple effect that also produces devastating consequences.


Told in dual timelines, debut author Jennie Wexler's Where It All Lands delivers a heartbreaking, Sliding Doors-esque novel about missed opportunities, second chances, and all the paths that lead us to where we are.


"This book succeeds in creating all the feels." - Kirkus

Jennie Wexler spent the first part of her career producing television shows appearing on VH1, Bravo, and The Travel Channel. She has a BA in literature/rhetoric from Binghamton University and an MA in television/radio/film from The S.I. Newhouse School of Public Communications at Syracuse University. Jennie’s debut young adult contemporary novel is Where It All Lands. She is a member of SCBWI and lives in New Jersey with her husband, son, and Havanese puppy.

"A moving story about loss and love and finding out who you really are, this debut novel by Jennie Wexler is refreshing and deep. For fans of Sarah Dessen and Rainbow Rowell this novel is heartfelt and honest with a touch of mystery. You won’t regret adding this to you TBR pile!"- Paige McKenzie, New York Times Best Selling author of The Haunting of Sunshine Girl

“Heartfelt and surprising. Stevie, Shane, and Drew are endearing, memorable characters, and their story illustrates how even the smallest twist of fate can have an enormous impact—but somehow love always knows exactly where to land.” —Alyssa Sheinmel, New York Times bestselling author of A Danger to Herself and Others and What Kind of Girl

"If your book club likes to indulge in good young adult novel, Where It All Lands is the perfect pick...heart wrenching [about] how both choices and chance can change an outcome in the blink of an eye." - She Reads

"This book succeeds in creating all the feels." - Kirkus

"Wexler explores how there is more to relationships than instant attraction... it’s about landing in love, not falling...an enjoyable read, especially for fans of Nicola Yoon." - Library Journal